The first comic book I ever bought was The Flash, volume 2, #7. I was 10 or 11 years old when I walked into that Newbury Comics in Framingham, MA. I have no idea what else I bought with my (mom’s) $5, but I remember that cover. The Flash, in his bright red suit, trudging through the snow, a group of heroes and a couple bearded dudes with him. (A quick Google search confirms my memory holds.) 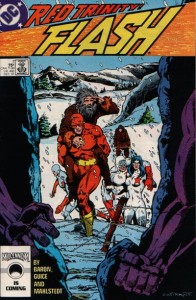 I think Red Trinity was a group of good…Russian(?)…speedsters. And they, with The Flash and those other guys, were on the run (pun somewhat intended) from Blue Trinity, a group of evil, maybe also Russian(?), definitely also speedsters for reasons. Sure, I can look it up, but that’s not the point.

The point is, that book grabbed me before I could grab it.

Not to be too dramatic, but nearly everything I love most in life (things, not people) can be traced back to that one comic book. This site & our podcast (at least, my participation in them), half the t-shirts I wear, most of the shows I watch and movies I see, all of it started withThe Flash, volume 2, #7. After #7, I caught up with #1-6 and continued with #8. When The Flash joined The Justice League, that book made the list. There I was introduced to the likes of Superman, Batman, Wonder Woman, Green Lantern, Martian Manhunter, Blue Beetle, Booster Gold and the rest of the DC pantheon. And if they had books, I grabbed those, too. Every Wednesday (aka New Comic Book Day), for as long as I can remember, I would walk out of my local shop with a stack of DC Comics, um, comics, a Boston Market chicken sandwich (mayo only, please) and an excited smile of anticipation on my face.

This week on the podcast, we covered Batman v Superman: Dawn of Justice (something we cheekily refer to as The Legal Proceeding). I won’t (completely) rehash it (it was awful, mostly. Wonder Woman was great, mostly, and briefly. Batman was good… kind of…?). Give it a listen (100% spoiler alert, for the episode and below, by the way). But, with my aforementioned history with the subject matter, I thought it worth a little more discussion.

This movie has weighed on me since it was released (which, granted, was only a week ago, but still). For the record, while I am a boy and a fan, I am not a “fanboy.” I believe creators bringing in their own interpretations of these characters is the foundation by which comic books have existed, succeeded, for the last 75+ years. Characters have to change. The Batman of 1938 is not The Batman of 2016, and that’s ok. You may not agree with those new directions, but without them there is stagnation and stagnation is boring. Plus, on occasion, good can come from the bad (Affleck as Batman and Gadot as Wonder Woman, in this case).

The flaws of this film are many (MANY). But, a week later, the one that stands out to me, the one that sets the tone of this cinematic universe more than anything, even more than mopey (dead) Supes, is this:

Jimmy Olsen, Superman’s pal, is killed within the first 10-15 minutes. Why? Because, and I quote:

“We just did it as this little aside because we had been tracking where we thought the movies were gonna go, and we don’t have room for Jimmy Olsen in our big pantheon of characters, but we can have fun with him, right?”
–Zack Snyder, “director”

My problem with this movie, and Man of Steel before it, is not so much the changes they made (though they are not great). But that those changes come from a place of ego and hubris, a place lacking respect and reverence. Because they want to be the ones that made Superman cool and Batman kill. Because this is their “realistic” vision for this universe (where a man can fly, a woman is immortal and Ben Affleck dresses up like a bat and murders people. Don’t worry though, they were all bad). This DC is where the people live. It’s gritty and grim. It’s grays and browns, and constantly overcast. And it’s where Gotham City is just across the bay from Metropolis. And where Superman kills, too.

Marvel is bright, full of action, drama, humor, pathos and primary colors. Do Marvel heroes kill? Yes, but not without cause or, more importantly, repercussion. Actions have have consequences. What they do matters in this world and they are held accountable for it. Which, I guess, is bad…?