Loren: This looks fantastic and I love me some Shane Black. It’s definitely my pick for the week.

RDT: This. This I will see in theaters. Maybe this weekend, but definitely soon. (Also, apparently, I look like Russell Crowe….?)

Loren: I was surprised how much I enjoyed the first one. This looks like a decent sequel. I’m not running out to the theater for it, but I’ll check it out on VOD or Redbox.

RDT: I liked the first one for what it was. This seems like more of the same. I’m sure I’ll see it at some point, eventually.

Rick: Why isn’t this called “New Neighbors”? Seems like a missed opportunity. Anyway, I didn’t see the first one, and I won’t bother with this either.

Loren: Funny actors do not a good voice cast make apparently. This looks not so good.

RDT: I feel like this should’ve come out at least a couple years ago. So I wouldn’t have watched it then, when it was somewhat more relevant, instead of not watching it now, when it’s not.

Rick: Like Ryan said, this movie is about three years too late. I’m all set, thanks.

RDT: RDT’s plan? To probably not see this movie. (Actually, it doesn’t look awful. But I will not sacrifice humor for truth! I will not!)

Rick: I like all of these people. I’ll probably catch it on video, but I’ll see it.

Loren: This is the wrong kind of cringeworthy. I don’t see myself ever seeing this.

RDT: Kind of interesting, watching a man’s political career falter. I’m not a huge political guy, but I am intrigued by this…Weiner.

Rick: When I clicked on the link I expected to see a documentary about weiner dogs. To say I’m incredibly disappointed would be an understatement.

Loren: Sad cancer movies are not really my forté. But who knows, I’m sure this will be pretty good.

RDT: Why did I think this was a horror movie before watching this trailer? This looks sad, good, but sad. If it pops up streaming, I could see myself checking it out. (You were thinking of this: Mama – Loren)

Loren: I don’t think I know what is happening here, but that cast is good enough to have me intrigued.

RDT: The cast for this is great. I’m definitely intrigued, though it looks a little “Malkovich-lite.” I probably won’t see it in theaters, but I may check it out eventually.

Rick: Great concept and a really good cast. Count me in.

Loren: Preacher was one of the first “adult” comics I read, and I gobbled it up. I wasn’t too sure about casting young Howard Stark as Jesse Custer but I’ve come around on that. I’m pretty damn excited for this.

RDT: I know I should be excited for this. And I’m going to watch it. But, I dunno, it’s just not clicking with me. I assuming I’m wrong, and it’ll be great.

Rick: I was an avid reader of Preacher for several years, so I’m going to give this at least a few episodes. That said, I’m not super convinced it’s going to be good.

Loren: I haven’t given this show any interest before, I don’t see myself giving it any now.

RDT: I watched the first episode of the first season, but never checked back in. I like the cast, but it just felt like something I’d seen before. Edgy for the sake of edgy.

Rick: The first season has been in my queue for a year. I keep forgetting about it until I scroll through and go “Oh yeah! That show!”, and wind up watching an old kung-fu movie instead. I feel it’s unlikely I’ll watch it at this point. Unless Netflix runs out of old kung-fu movies, that is.

Loren: I love Maria Bamford and this has some great comedian guest stars but the uncomfortableness of her actual real life breakdown may be too much. I dunno, maybe?

RDT: I feel like Maria Bamford is one of those comedians I should love, but don’t. I’m sure she’s a lovely person, but…. 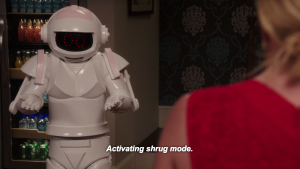 As always, you can find us on Facebook and Twitter. And send in your questions/comments to questions@hollywoodpicturenews.com