RDT: I have no words.

Rick: I can’t wait for this to top the list of Razzie winners next year. I mean, it should at least win the award for Most Literal Title of the Year. That’s a thing, right? Also, who’s up for a double feature of this and Mac & Me?

Jen: YAAAASSSSSSS!!!!!! MacGyver and an Octopus in a truck can take on the world! Also, the budget on this was $125 million. What do you think the odds are they make that back?

Rick: So, it’s some shitty hybrid of Candyman, Sinister, and The Ring? *rolls eyes*. Also, it’s fitting that the poster art is just as derivative as the movie it’s promoting: 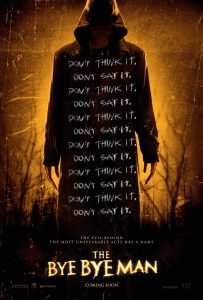 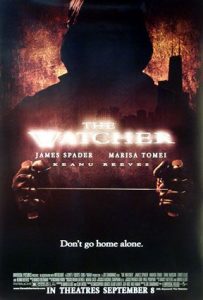 Remember that Keanu Reeves masterpiece, The Watcher? No? Anyone? Okay. Just me, then.

Jen: At :47 into this trailer is the worst onscreen kiss I’ve seen in a long time. This looks like the type of horror movie they release in January to fill a random weekend when nothing else is happening… oh wait…

Rick: When I saw the title I thought it might be an adaptation of my favorite novel by Charlie Huston. Sadly, it isn’t. We have this instead. I may throw this on at home when I need a mindless action fix, but I’m not going out of my way to see it.

Jen: Sometimes I watch these trailers at night then sleep on it*. This morning I came back to give my opinions and I honestly can’t remember what this was about. Watching it again I see why. It is a movie I feel like I’ve seen a million times with Tom Cruise or Liam Neeson. Nothing in this is surprising and nothing looks new. *I wish I had a sleep/sleepless joke to make here, but you can’t win ‘em all.

Loren: This just looks like yet another Bollywood love story that I don’t have any interest in.

Rick: Well, it’s nice to see that Americans aren’t the only ones making generic, by-the-numbers movies. Certainly looks pretty, though.

Jen: That guy is super hot. He’s going on my list. This movie is not.

Loren: You’d think a movie called The Comedian would look funny, but then you remember comedians are usually horribly depressed. Now I’m depressed. Thanks a lot.

Rick: But what’s their net worth RDT? Kidding aside, when I first saw the poster I figured it was a belated sequel to The King of Comedy. This is not the case (seems to be a thing with this week’s movies). Though it does make me want to pair it up with Punchline in a double feature. The older man/attractive younger woman thing isn’t going away, so I’m just running with it. As far as everything else goes, I feel like the trailer gives away nearly every beat, which doesn’t leave me too much hope for the rest of it. I’ll see how reviews are before diving in.

Jen: This is not a sequel to The King of Comedy. Although I would see that movie. I sort of love that Hollywood will not give up on the May-December romance storyline. You do you, Hollywood! I guess I should be thankful that Leslie Mann is in her 40s and getting work. I wish I didn’t have to be thankful for that.

The Book of Love (Limited)

Loren: Why? Why is this a thing that’s happening?

RDT: I literally have no feelings about this.

Rick: This feels like it should have been a Lifetime movie. There’s an audience for this, but I am not it. It’s a good advert for the dangers of distracted driving, though.

Jen: Maisie William’s accent is… what is it exactly? Cajun? Southern? Trying to hide British-ness? It took me out of this trailer completely. I appreciate that they’re using the dead wife trope instead of the dead kid trope though. (But Jen, wasn’t the wife pregnant? – Loren)

We Are The Flesh (Limited)

Loren: What the actual fuck?

Rick: It’s a no-brainer that I’m going to see this. It will hold me over until Raw hits theaters in March.

Loren: This looks right up my alley. I’ll be checking it out for sure.

RDT: I watched the pilot when they released it last year and really enjoyed it. Admittedly, I have a lot of tv to catch up on (there’s a list!), but I’m going to try to make room for this.

Rick: I kept meaning to watch the pilot of this and never got around to it. This will wind up in my queue, though I probably won’t watch it.

Jen: This doesn’t look bad. I probably won’t end up watching but will not think ill of those who do.

Loren: Already added to the queue.

RDT: Jim Gaffigan makes me laugh, a lot. I’ll be watching this this weekend.

Rick: I enjoy me some Jim Gaffigan. It’ll be good laundry-folding TV.

Jen: The older I get, the more I enjoy the non-threatening comedy of Jim Gaffigan. I mean the guy was Santa on the Sesame Street Christmas Special this year for goodness sake. He’s sort of like America’s dad, and with five kids if he keeps it up he WILL be America’s dad.

Loren: Great cast and it has that Pushing Daisies look to it. I think I’m in.

RDT: This looks great. Loves me some NPH. So, much like with Sneaky Pete above, I’m going to try to squeeze this into my tv watching at some point in the near future.

Rick: I’ve never read the books the series is based on, but I did enjoy the movie that came out…13 years ago?! Cripes. Anyway, after this trailer and reading about the approach they took in adapting the material I’m definitely interested.

Jen: Well, that looks delightful. Count me in. Doogie Howser can do no wrong.

Loren: I’m kinda nah on this.

RDT: I am intrigued, but have lots and lots of other tv to watch. If reviews are good, I’ll squeeze it in. If not, I will never think about it again starting…now!

Rick: Ehhh. Reminds me of all of those other, for lack of a better term, royalty dramas that I have no interest in. I’m okay, thanks.

Jen: Drumpf allegory, anyone? This looks good, but I don’t know if can handle the reminders of my Catholic upbringing.