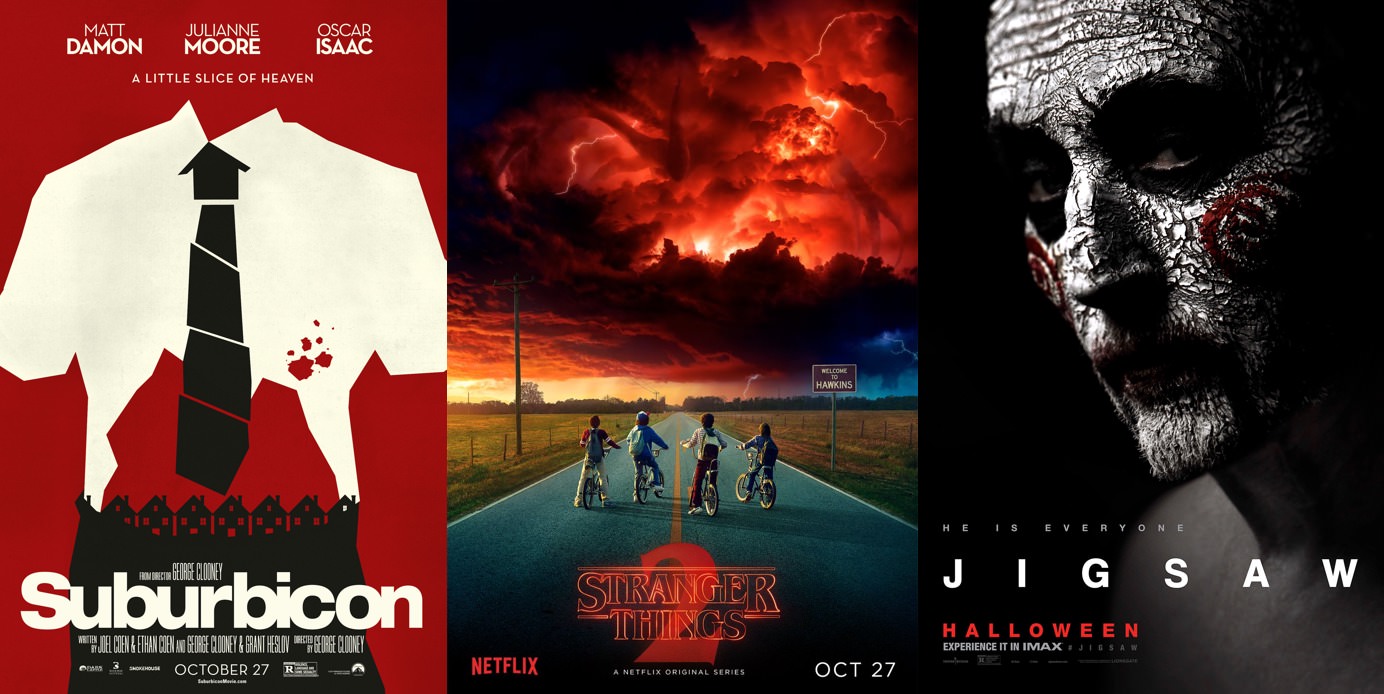 Rick: Antonio Banderas seems to be making a lot of these cheapie action movies lately. Who does he owe money to?

Jen: Isn’t it sort of a cheap ploy to use a voiceover when your main character has taken a vow of silence?

Loren: That looks pretty fascinating but the real life aspect of it may be too much for me.

RDT: I’m not as intrigued as my cohorts, but I’ll still keep it on the radar.

Rick: I enjoy a good mystery, and this real-life one is even more compelling. I’ll keep it on my radar.

Jen: Oh I am so in for this. I am a sucker for this kind of mystery.

Loren: Why do people insist on making Cyberdine or Cylons? Maybe we should reconsider making AI smarter than us so we don’t cause the singularity and bring on Judgement Day. We are so boned.

RDT: I, for one, welcome our new robot overlords.

Rick: I read about this when it happened, so I don’t feel compelled to watch the doc. However, we’re totally going to get taken over by machines. The days of us meatbags are numbered.

Jen: Isn’t this the same story as when Deep Blue played Kasparov? My husband points out that Go is a much harder challenge than chess, but the dramatic tale they are telling seems identical. Also, build me a computer that can beat me at 1980s Songburst and then I’ll be impressed.

All I See is You

Loren: This feels like seven movies in one. I kinda want it to just pick, like, I don’t know, two?

RDT: I agree with Loren. It’s kind of all over the place, but if the reviews are decent I’ll give it a watch when it streams.

Rick: Well, that took a hard left. Color me intrigued.

Jen: I like the cast and am curious enough about what’s really going on here that I’d give this a chance as a grown-up movie night.

Loren: I feel like if I were one to get high this would be the perfect movie for me to do so beforehand.

Rick: I’ll give it one thing: it certainly looks pretty. I feel like I got the jist of it from the trailer, though. I don’t need ninety minutes of this.

Jen: Meh. I feel like 20 minutes on YouTube would give me the best of what this has to offer.

Loren: What an odd string of events. It’s almost unbelievable except that it’s based on a true story. Mark Webber pulling double duty (triple maybe) as actor and director hopefully shines here. I just don’t think I’ll ever see this.

RDT: I’m actually a little intrigued by the non-doc doc style. If it stays on the radar, sure, why not?

Rick: The pseudo-documentary style is a bit overused lately, but it feels incredibly appropriate here. I’ll give this a go.

Jen: I’ve got to echo Loren on this one.

The Heyday of Intensive Bastards

Loren: Indie Collaboration the Movie. Starring a pretty ok cast. Coming to a theater not really near you that you have to drive way out of the way to go see.

RDT: This cast is phenomenal and I could not give a shit less. It looks so…blah.

Rick: Is this the millennial Short Cuts? I like the cast, but that trailer is all over the map. Definitely doesn’t persuade me the flick is worth seeing.

Jen: This trailer confused me so much that I googled it. This was produced by James Franco’s UCLA film class. So it is *literally* a student film. That explains a lot.

Loren: What is it, Mark Webber week? I don’t think this is for me.

RDT: I added Loren’s comments to Rick’s comments and decided to not even watch the trailer.

Rick: Well then. That looks unsettling. I’ll keep it on my radar.

Jen: Yeah, I’m not going to see this.

Loren: And people wonder why I’m not all that keen on organized religion.

RDT: At first I was all “eh, religion, whatevs”, but then I got a little intrigued. Perhaps if a screening or screener became available.

Rick: Ordinarily I’d say “meh”, but I’m curious about these characters and how far their arcs go. Put it on the list.

RDT: Once again Loren + Rick = me not seeing this movie.

Rick: This looks absolutely weird and unhinged. Sign me up.

Jen: I laughed a lot at the line about putting her bag on the floor – is it art? Modern art seems ripe for a satirical take down. I’m in.

Loren: I don’t know what that movie is actually about. I think that’s a good thing.

RDT: They sure do make a lot of movies these days.

Jen: There must be something more happening here, but I don’t know what it is and am not curious enough to find out.

Loren: Another one that I probably won’t rush out to the theater to see but thought it looked pretty ok. Hopefully this is more than just a fun trailer. I can see myself checking out at home some time.

RDT: Looks fun/funny. I don’t do horror, but I do do (tee hee) horror comedy. I’ll check it out eventually.

Rick: I can’t tell if I’d be continuously annoyed by the leads or brush it off and enjoy the lunacy. If I watch this, it’ll be from my couch.

Jen: This seems like it could be a lot of fun. They had me at Peeta gets his heart cut out.

Loren: I like Jack. Already added this to my queue.

RDT: I chuckled, so I will watch.

Jen: I laughed a bit at this trailer, which is more than I can say for many Netflix comedy specials. I’ll check this one out.

Joan Didion: The Center Will Not Hold

Loren: That certainly took a turn that I was not expecting.

RDT: What everyone else said.

Jen: This makes me want to read some Joan Didion stat.

Loren: Last time The Lady™ and I watched it all in one night. I’m not sure that’ll happen again but…Also, I’m really hoping that this show doesn’t suffer from Second Season-itis. It’s got a lot to live up to.

Jen: My husband just binged the first season a week ago (aww, it’s his first binge-watch) and now we can’t wait to jump into season 2, together. See, romance isn’t dead.