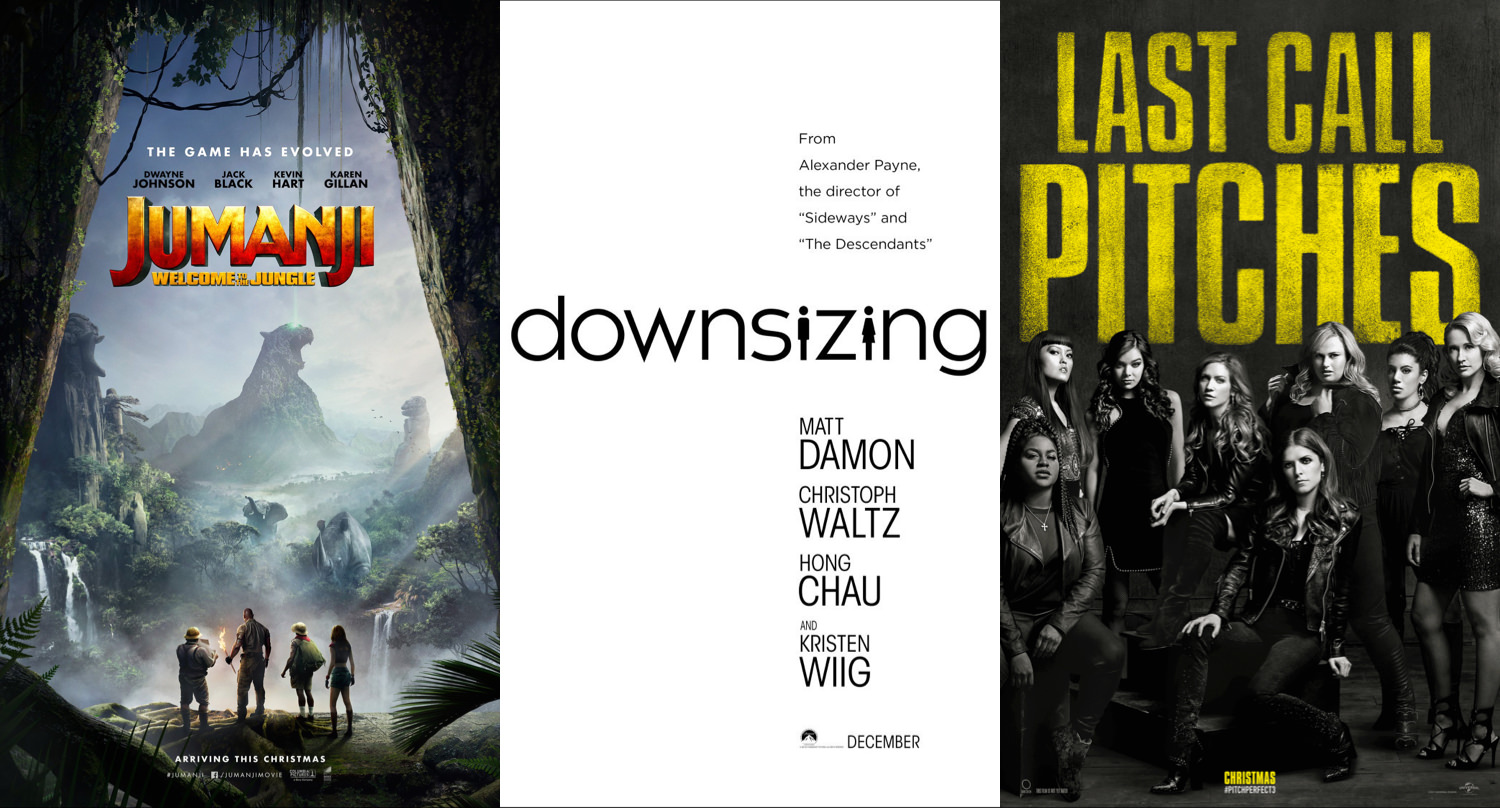 Loren: I think I’ll catch this on the… wait for it… small screen. YES!!! They don’t get better than that people!

RDT: I like most of what I’ve seen of Alexander Payne. But I just can’t get pumped for this. I’ve heard very mixed things, too. I’m not a definite “no,” but more likely a “wait until streaming.”

Rick: This looks like fun, but I’m not super geared up to see it.

Jen: I chuckled at the trailer, but not enough to make me run out and see this. I like Alexandre Payne, but I’ve never loved any of it, so I think, like Ryan, I’d wait for streaming on this one.

RDT: This movie is 125 minutes long. 2 hours, 5 minutes! No comedy should be that long. Regardless, I feel like I’ve seen it before….like a lot. Pass, until streaming at least.

Rick: Nope. Not even if it were half its current running time. To RDTs point about long comedies: You can get away with comedies near the two hour mark. The Blues Brothers (2hrs 28 min), Ghostbusters (1hr 47min), Animal House (1hr 50min), Stripes (2hrs). I think the difference here is the quality of the content transcends its run time.

Jen: Long sigh. It just looks too much like every other movie of this ilk. A lot of “guys being guys.” I’m kinda over it.

Loren: Wolverine IS P.T. Barnum the musical! It’s so crazy that it has to work. Right?

RDT: Not a fan of circuses. Like zoos and aquariums, they make me sad.

Rick: I’m always willing to give a big, bombastic musical a shot. There are so few made anymore. Plus, I enjoy that Hugh Jackman fellow.

Jen: I get a REAL Moulin Rouge vibe off of this film. Which could be good or bad depending on who you are. I’d like to give it a shot and hope for the best, but I’m keeping my expectations low.

Jumanji: Welcome to the Jungle

Loren: I’m not as sold as RDT is but it definitely looks like a decent amount of fun. I’ll check it out eventually.

RDT: “Fool me once” (Baywatch) be damned, I’m in for this. It looks fun! If it sucks, so be in. Still wouldn’t mind seeing Dwayne kicking some serious ass though. I mean, come on, where’s my Rundown 2???

Rick: I was out on this until I saw the trailer. I don’t know if I’ll rush out to theaters for it, but it looks fun enough to check out at home.

Loren: I’m a fan of the first and was ok with the second. This one though, I don’t know. It looks like there’s a weird action subplot that I’m not all that down with. I’ll see it but certainly not in theaters.

Rick: The cast of these movies has been great since the beginning, but I’ve never been able to convince myself to watch. If I do eventually take the plunge, it’ll be from my couch.

Jen: I’ll watch you on the streaming device it ends up on several months from now. That’s how I roll with the Pitch Perfect movies.

Loren: I’m with Rick in that Tom Hanks seems a bit miscast (even if he’s always pretty spectacular). I know that this movie is going to be good, but I can almost guarantee I won’t ever end up seeing it. Not really my cup of tea.

RDT: I saw this a couple weeks ago at a screening/Q&A (attended by Spielberg, Hanks, Streep, among others). It’s really, really good. I think it’ll be nominated for a bunch, but likely won’t win a thing. Regardless, it’s well worth seeing. Do a double feature of The Post followed by All the President’s Men.

Rick: I’m curious about this, but I feel like Tom Hanks is miscast in this role. It needs someone a bit more weathered. This will probably be a screener movie for me.

Jen: Yes, yes, yes, I cannot wait for this one! I’ve been counting down the days!

Loren: I do like me some Agatha Christie and this looks like something I could really sink my teeth into. In.

RDT: I’m down for a good murder mystery, with some weird family stuff thrown in. Good cast too! Maybe not in the theaters, but eventually on the ‘flix or the ‘lu or the O NOW.

Rick: Did they dress Gillian Anderson as Mrs. White from Clue on purpose? Doesn’t matter. I’m in.

Loren: I just don’t think I care about these people’s lives. Sorry, no thanks.

RDT: This is the description under the trailer: ”A snapshot from the life of a bourgeois European family.” Yeah, I’m good.

Rick: You can count on anything Michael Haneke does (Funny Games, Amour, The Piano Teacher) to be anything but happy. If you’re into realism and unflinching character drama, he’s your guy. Is it obvious I’m going to seek this out?

RDT: Christian Bale’s mustache is epic! And, given it’s him, likely real.

Jen: This looks good, but I just can’t get it up for the Western genre. Is there a pill for that?

Loren: There are so many other shows I want to watch on Amazon alone. This will likely never be one of them. Good to see Patrick from Coupling getting work though.

RDT: Now that I can access Amazon Prime Video via the AppleTV…I will still likely forget about this.

Rick: I’m on the fence. I think if it were a feature I’d watch it, but I don’t know that a single feature is enough to do the whole story justice. :/

Jen: I have no strong feelings on this.

Loren: I keep saying that this probably should have been a series rather than a movie but then you don’t get Will Smith. Maybe this will be some sort of incredibly expensive pilot. Anyway, sure why not.

RDT: I’m just curious enough about the premise to give this a couple hours of my life. Bonus that I don’t have to leave the house for it!

Rick: I mean, it’s basically Alien Nation. I’m only watching out of curiosity.

Jen: I feel like RDT nailed my feelings on this one.

RDT: To Loren’s delight, I got my fill in season 1. Haven’t felt the need to go back since. I imagine it’s pretty much the same, and that’s ok.

RDT: I never made it through season 1. I might go back…but probably not.

Rick: I got tired of people badgering me to watch it when this first came out, so when I finally caved I hate-watched half the pilot before getting bored and turning it off. I may come back around on this when it finally finishes its run and I can start clean.

Jen: This is one my list to binge at some point in the future. I hear sexy things.

Loren: I’ve seen Howard on a couple of panel shows that I watch from the UK and he’s usually pretty funny there, but this. Yikes. Maybe if I was SUPER British but even then, I doubt it.

Netflix The Toys That Made Us Trailer

Loren: Yep, as the resident LEGO collector of the group this is a no brainer. Funnily enough, I had a friend that worked on the LEGO episode of this show. (Different than RDTs friend below).

RDT: Oh! I heard about this from a friend that works at Netflix (careful, don’t trip over that name I just dropped). I didn’t realize it drops this week. Definitely count me in!

Rick: As a recovering toy collector, this is like crack to me. Gimme.

Jen: I’m hearing good things about this one, will definitely check it out.