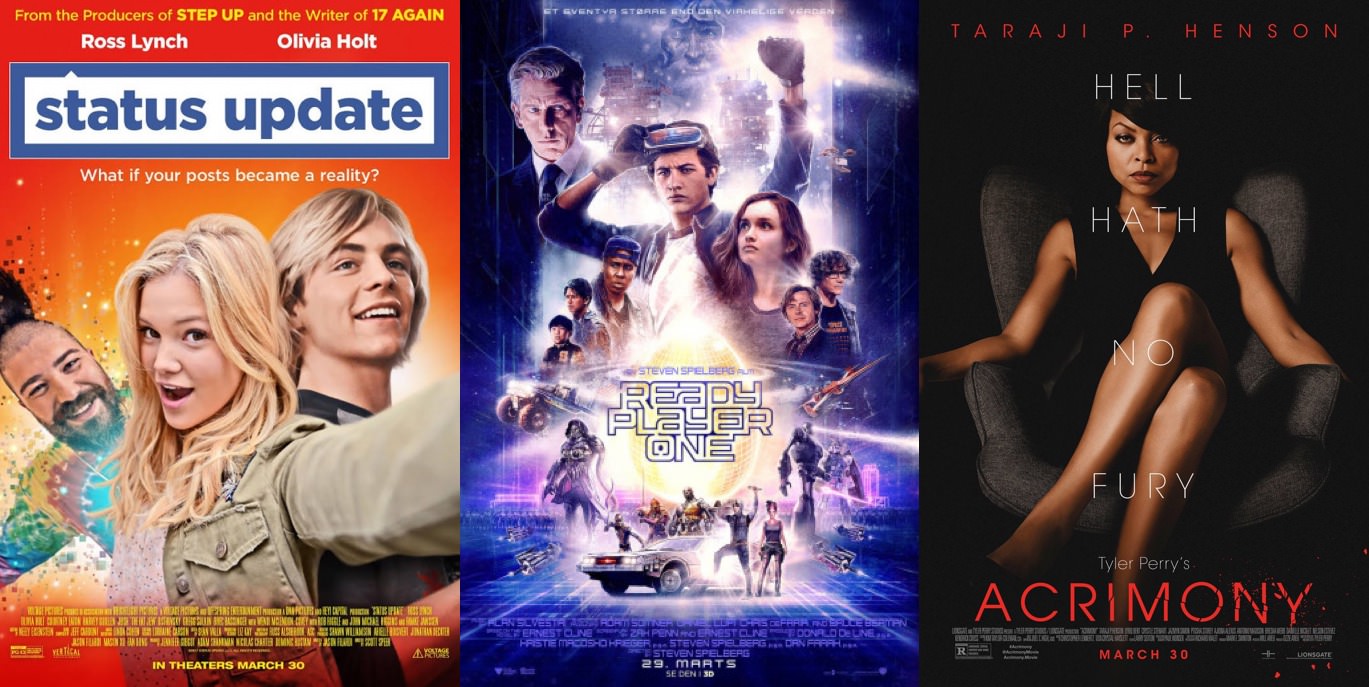 Loren: I actually read the book that this was based on (first book I’ve read cover to cover in *redacted due to shame*) so I’m really looking forward to it. I think Spielberg is the best choice for this, it’s just too bad that they couldn’t license everything the book has in it. I kinda can’t wait to see how they pull this off because there are clearly some changes made between book and movie.

RDT: I loved the book, but haven’t been impressed with any of the marketing. I mean, I’m going to see it. I’m just not sure I’m going to like it.

The Lady™: I’m so stoked that Loren borrowed my copy of the book. We can finally sit together and shamelessly nit-pick differences between the text and film! 😀

The Lady™: Taraji P. Henson scares the crap out of me. This isn’t helping.

God’s Not Dead: A Light in the Darkness

Loren: The last line of the song they used was “Let love explode and bring the dead to life”. Uh… what? I don’t think that’s how that works. Also, that’s pretty risqué for a God movie.

RDT: This is the 3rd one of these, right? Passed on the first two. Don’t see why I would end that streak now.

The Lady™: ZOMG I’M SO EXCITED TO NEVER SEE THIS MOVIE! YAYYYYY!!!

Loren: That looks a hell of a lot better that Batman V. Superman, but I feel like this would be more entertaining as an Indiana Jones type of movie.

The Lady™: What Loren and RDT said.

Loren: So it’s The Secret: The App, but it actually works? Also it’s kinda like a way happier version of Click, way happier. Why was Click so sad?

RDT: This looks like a movie one or both of the Coreys would have starred in back in the late 80’s, except obviously not an app. It would be a diary or something. 13-year-old me would watch the fuck out of it. 41-year-old me? Not so much.

The Lady™: Younger me would’ve been really into this. Adult me will can just rewatch: Freaky Friday, Glee, Grease, 13 Going on 30, Teen Witch, 17 Again…

Loren: What a bizarre cast but I’m kinda into it. I do love a good noir story, whether it be classic, neo, futuristic, etc. Onto the list it goes.

RDT: I like Zoë Kravitz, but that trailer didn’t do a thing for me. Maybe if reviews are good, but, honestly, probably not.

The Lady™: Oooooo, this could totally be a current era Brick!! Please be a good as the trailer looks.

Loren: I’m either going to see that at one of Rick’s Horror-fests or I’m going to wikipedia what it’s all about but I’m certainly not going to rush out to the theater to see it.

RDT: Based on Loren’s comment, I’m not even going to watch the trailer. Pass.

Loren: We have a couple of friends who are expecting right now and they made a kind of similar joke to the conceit of this movie. But that was just it. A joke. You don’t go and do that. It’s kinda messed up.

Loren: Aren’t we past the joke that is Tommy Wiseau?

The Lady™: Part of me is really confused by Tommy Wiseau, and part of me just feels sad for him.

Loren: Not for me.

Loren: That looks weird, funny, and British. Sure why not.

RDT: Not familiar with him, but it looks funny enough. I guess. **shrugs**

The Lady™: I’m so glad George Weasley has found a new passion after the horrific events at Hogwarts. I look forward to watching the specials!

A Series of Unfortunate Events: Season 2

Loren: I didn’t watch Season 1 yadda yadda yadda, but this has always looked much better than the Jim Carrey version I think it’s based on. I’m not going to do any googling to test that theory though.

RDT: I think I’ll just wait until season 3, which is the final season, drops and binge from there.

The Lady™: I watched the first episode of the first season, and promptly gave up.

Loren: I really like Noël Wells and Ben Schwartz and this could be really sweet if not a little hard to watch. Maybe?

RDT: Looks a little (500) Days of Summer-y. I never understood the reason for the parentheses in the title. Is “Days of summer” a thing? Anyway, the cast will get me to watch this…or, more likely, I’ll completely forget about it. Sorry.

The Lady™: Hey Loren, guess what? I’m making you watch this as soon as it comes out.

Loren: Creepy. It’s too bad Netflix hasn’t been so stellar with their original movies, because this looks kinda cool but I don’t want to waste my time. I’ll wait on reviews before I sit down.

The Lady™: I can’t decide if this looks really good or really awful. Like, I’m totally into the story, but I don’t think the execution will pull it off.

Loren: Sadly this feels a little formulaic for me. I don’t think I’m adding it to the queue.

RDT: If reviews are good….I’m still probably never going to watch this. (Sorry…)

The Lady™: Something in the trailer is hitting home for me. Surprisingly, I think I’m in?

Loren: Yep. Just as soon as I catch up on the previous season.

RDT: Watched it. It was pretty good, though I don’t know how much longer it can go.

From Hollywood,
–Loren, RDT, and The Lady™