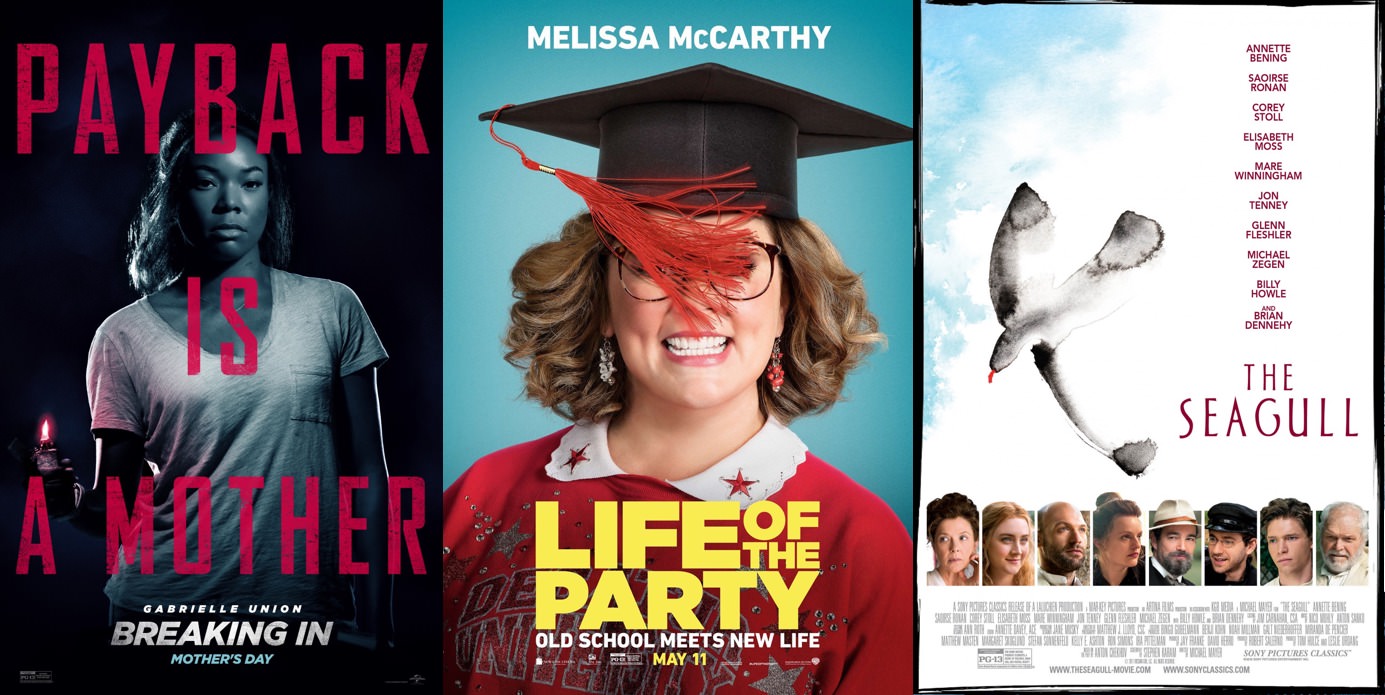 Life of the Party

Loren: The only thing that made me even smirk in that trailer was Maya Rudolph. Pass.

RDT: I chuckled just enough to consider it when it’s streaming in a few months.

The Lady™: I didn’t want to find this funny. I’m very over these types of movie. And yet, vaGoogle kinda got me…

Jen: I could watch this on a lazy, hungover Sunday on my couch eating pizza after an epic night of partying. Oh wait, I’m in my 40s? Yeah, never mind.

Loren: I like Gabrielle Union and this is a fun spin on the “Home Invaders” trope. I won’t see this in the theater but I’ll check it out down the road.

RDT: Just badass enough for me to give it a watch on the old ‘Flix or ‘Lu (as the kids are calling it) or whatever streaming service it ends up on.

The Lady™: Cool! Lady’s a badass! Totally not for me, but cool.

Jen: I usually hate movies like this but damn if I didn’t find myself rooting for Gabrielle Union even in trailer form! Maybe it’s the mom in me, but this looks badass and fun. In.

Loren: Was this trailer made in 1999? That’s a lot of people for a movie that doesn’t look so good. I can’t even imagine this is paying for all of their boats. I’m very confused.

The Lady™: I love that this looks like it’s from 1999! The art of the great one and done movie kind of died after the 90s. I have a feeling I’ll end up watching this more than a few times.

Loren: I got Joel Schumacher’s Atomic Harley Quinn, British Psycho from that. Still, looks just weird and macabre enough to get me to check it out… eventually.

RDT: David Lynch’s Joan Wick? Too weird for me. You all have fun.

Jen: Hmmmm OK, there’s a lot going on there but it might just pique my curiosity enough to check it out.

Loren: Howard Stark and Strawberry Fields as sad parents. “Oooooh where do I sign up”, he asked sarcastically.

RDT: You know, halfway into this trailer, I was wondering which “indie movie married couple” trope they were gonna break out. I had it narrowed down to “cheating spouse” or “dead kid.” Suffice it to say, I was wrong.

And does it bug anyone else that Dominic Cooper and John Slattery look absolutely nothing alike?

The Lady™: Gemma Arterton looks a lot like Eddie Redmayne to me. Is that weird? Oh, the movie? Yeah, I’m never gonna see that.

Loren: Who is Justin Chatwin and am I supposed to buy him as some hard boiled detective? From all the stills I saw of this flick I thought it was going to be some sort of comedy, but nope. Playing it straight. Bold choice.

RDT: Justin Chatwin was in Dragonball: Evolution as Goku. This is Goku.

Yeah, after that trailer, I still find him more believable as that than a “cop with nothing to lose!”

The Lady™: Justin Chatwin looks like a Chinese knock off Adam Scott. Close, but not quite right.

Loren: Holy shit. That looks so violent and over the top in the best way. Rick’s gonna love this one. If I’m in the mood for a feminist revenge flick I know where I’m going.

RDT: Wait…so did that ant bring her back to life? Is this the ant version of The Crow?

The Lady™: Woah!! I was not expecting that. If it gets decent reviews, I’ll for sure check it out.

Jen: Badass. I don’t think I could stomach this, but kudos to those who do.

Loren: It’s interesting to see a generic “wife is a spy” movie from a different cultures point of view. I probably won’t ever see this but I like that it’s out there.

The Lady™: Looks really well done, but I think it’ll be much too stressful for me.

Jen: I thought I wasn’t going to be interested in this, but the trailer reeled me in. Interesting stuff.

Loren: This looks like when you find a “trailer” that’s just a bunch of different movies cobbled together to make a “story”. Side note: Ron Eldard looks terrible.

RDT: Why has noone made a movie called “Higher Power” about a weed smoking priest?

The Lady™: How many Sci-Fi/apocalypse tropes can you smash into one movie?

Loren: Glad to see famed Political Satire Artist James Carrey is getting other work. This really harkens back to the late 90’s thrillers for me. That’s not a bad thing.

RDT: I remember back in the day saying I prefered “actor” Jim Carrey to “funny” Jim Carrey. I was wrong.

The Lady™: In terms of quality, this looks to lie somewhere between Broadchurch and Law and Order: SVU. I live for both, and yet I’m not sold on this. I think I need my crime stories to either be really really good, really really bad, or really really episodic?

Jen: I’m not sure how to feel about this Jim Carrey. I’m more curious than anything.

Loren: HAHAHA! That English dubbing is so bad. It really takes you out of what looks to be a very serious film about the church buying a TV station? I don’t know I got lost listening to that dubbing.

RDT: Did they take a serious movie and make it a comedy by dubbing over it? No. It sucks anyway.

The Lady™: Based on a true story? Sweet! I’ll just read a book about it.

Loren: Meh. This looks fine and inoffensive but, I don’t know, it lacks charm. Unless I hear it’s amazing and a must watch (which, let’s face it, I’m not going to) I’m not going to see this.

RDT: This looks like every perfectly fine, but not groundbreaking, teen movie ever. **shrugs**

The Lady™: I have nothing to say. It just exists. And that’s fine.

Jen: This feels like a sweeter version of Election, I’m not sure it that’s really a good thing or not, but it’s something I noticed and thought I’d report in on here.

I Am Your Mom

Loren: No you aren’t. And that’s fine. You seem nice though.

Loren: We all know I love me some Stand Up and this looks fine. This would be the epitome of a laundry show for me.

RDT: If it takes more than 5 minutes for me to laugh, I’m out. I got shit to do.

The Lady™: Is this stand up, or a TedTalk?

Jen: I just always want to give Hari Kondabolu a hug. I’ll give him a virtual hug by enjoying his stand up from my couch.

Loren: I do like a good British whodunnit. But it’s gonna be hard getting past the Dexter of all of this.

RDT: Too many other shows. Also, is Michael C. Hall actually British? I know I could look it up, but I don’t care enough to.

The Lady™: Oh yeah, now this I’m absolutely watching. Into the queue it goes!

Jen: Having never watched Dexter I don’t have any hang ups about Michael C. Hall and this looks pretty strong. Adding it to the list.

Loren: Well that looks awesome. Also, how have I not heard about this heist before? Sign me up.

RDT: Ok, I know I have a lot of other docs to check out, but this just jumped up the list.

The Lady™: Mark and Jay Duplass did Wild Wild Country. If this is even half as good as that, I’m totally sold.

Jen: When can I watch this? I am SO in to check this out as soon as possible.

Loren: I’m sure someone wants to see this movie, but I’m not that person.

Jen: When my daughter turns 11 I think I’ll have to watch a lot of movies like this, so I’m going to put that off as long as possible.

Loren: Here’s what I said for Season 2, the sentiment still stands:

I wanted to like the first season more but it wasn’t all that good. I probably won’t continue with Season 2, but here’s hoping that we get more science-based TV out there.

RDT: Never made it to season 1.

The Lady™: I really should watch this. I just keep forgetting! Sorry Bill Nye. Sorry science.

Jen: I believe that for Season 2 I said “what Loren said” I stand by that.

Loren: I’m not sure how this will work as a series but at least Hulu is getting into the “Coming of Age Series” game. Good for them.

The Lady™: Even the 14 year old girl in me doesn’t want to see this.

Jen: So is this going to be some sort of “real time” 12 hours of episodes thing? I could be into that. I do love HS party movies and like the idea of stretching one a whole season.

Loren: Ah, Benedrunk Cumberdrink. It’s good to see him humanized. Sometimes he seems a little like a robot.

The Lady™: Even if this wasn’t starring Buffalo Custardbath (whom I’m completely and utterly in love with), I’d still be really excited about this show. It just looks so damn good!

Jen: I have the feeling this is more dramatic and less comedic that this trailer and the musical selection would have you believe. But I’m open to try anything Benedict Cumberbatch does at least once.

The Adventures of Rocky and Bullwinkle

Loren: I’m finding it hard to enjoy the new animation style. This just may not be for me. Too bad, I seem to remember really liking the original.

RDT: I’m getting a Ren & Stimpy vibe. Sure. Wait. No. Probably not.

The Lady™: I actually really like this animation style. It reminds me of the older Nickelodeon cartoons. I might lazily watch a few episodes here and there.

Jen: I loved Rocky and Bullwinkle as a kid, well as a 20-something anyway and that’s practically a kid. I don’t see anything in this trailer that gives me pause so, sure, why not?