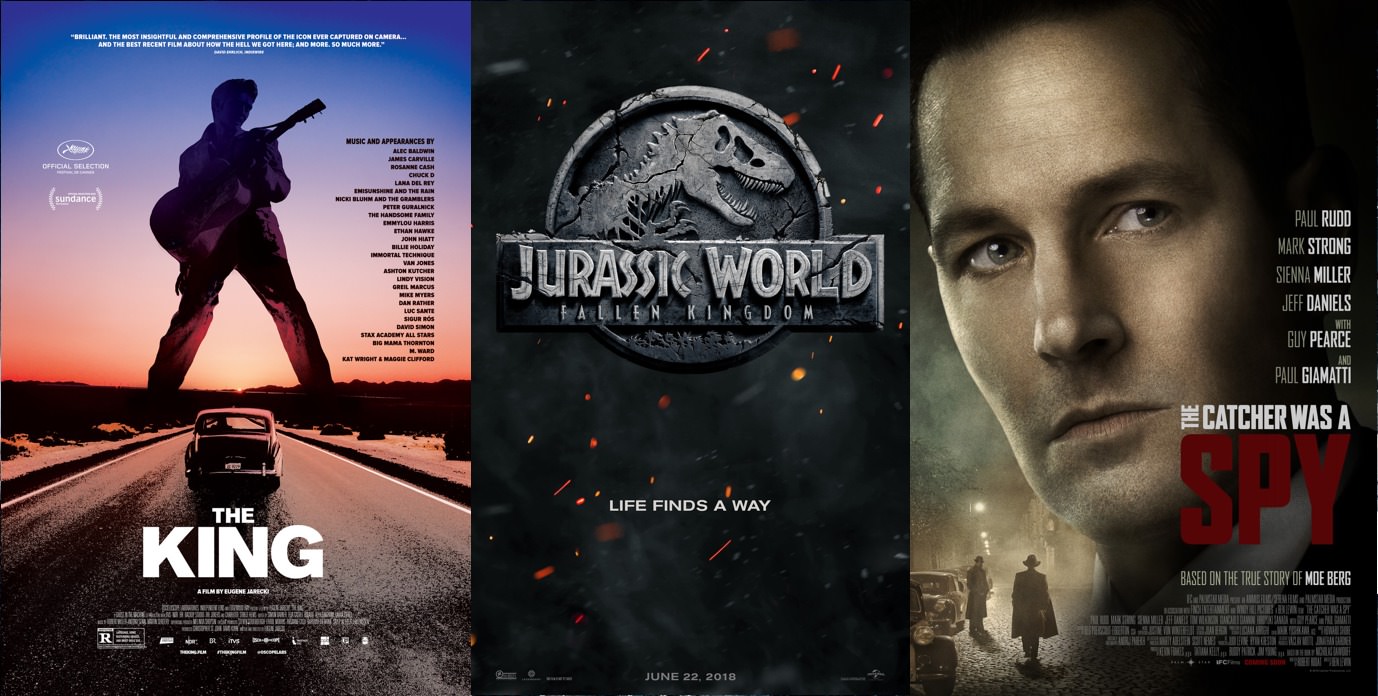 Loren: How can we go from Jurassic Park to this? I wasn’t a huge fan of the 1st (4th) one and don’t hold out too much hope for this one. And I bet you this leads to those weird Human Dino hybrid soldiers we saw concept art for in the next one.

The Lady™: This movie can’t decide if it’s an action comedy or action horror, which is really disconcerting for the view. (Also… Is Blue a cat? She seems to only listen to commands when it suits her. Clearly a cat!)

Rick: It’s a sad state of affairs when the Carnosaur sequels make more sense than this movie.

Jen: I think Chris Pratt is dreamy. But this looks ridiculous. However, if I were 12 or 13 and it was a hot summer afternoon, I would be there right away – in fact, I think that was how I saw the original “Jurassic Park”. What goes around comes around, I guess.

Loren: At first I was sitting here going we don’t need another documentary on Elvis, but that’s not what this is. This is a doc on race relations in America for the last 50 years. And one that looks like it’s done well. I can get into that.

The Lady™: The downfall of the American Dream told through the birth of Rock and Roll? I don’t even like Elvis, and I could not be more in!!

Jen: I saw Erroll Morris’s name on there and I don’t need to see more, I’m in.

The Catcher Was A Spy

Loren: I’m a little worried about the fact that with a cast like this, I hadn’t heard anything about this movie until I was putting together this week’s WW Doc. That leaves me with the feeling that this movie is probably terrible. Too bad it actually looks interesting.

The Lady™: I love it when traditionally comedic actors take on hard hitting dramatic roles. This is how you get Jim Carrey in Eternal Sunshine, Bill Murray in Lost in Translation, Robin Williams in Good Will Hunting. I have super high hopes for this one.

Rick: Yep. This reeks of a mediocre movie getting dumped into theaters by its distributor. What a waste of a concept and cast.

Jen: That’s a pretty stacked cast and an interesting story, but Loren and Rick make good points. My thought, why isn’t this being released in the fall? Counter-programming?  Meh, maybe.

The Accidental Detective 2: In Action

Rick: I know I have the first movie in my queue on some streaming service. I just haven’t gotten around to it yet. That said, action comedies from that part of the world (China and Korea, especially) have always been a bit wackier than they are in the US, so this isn’t out of the norm. If I wind up liking the first installment I’ll probably check this out.

Loren: I can’t believe that Anti-Semitism is still something that we’re dealing with today. And the fact that it’s getting worse in places like France and here in the States is horrifying.

The Lady™: I’m sorry, but what the actual fuck is happening in the world? I had France on a gilded idyllic pedestal. Now I’m just really upset.

Rick: Ugh. I don’t want to live on this planet anymore.

Jen: I’ve always believed that people are inherently good. If they could just open their eyes, everyone at their core wants what’s best for their families and others. The times we are living in make it very hard to square a positive world view with the constant evidence of hate. It’s the one opinion I could never be open-minded about – how do you see things from the other side when they other side is the antithesis of love?

Rick: Okay. I looked up the plot for this:

A young woman unexpectedly inherits all of her estranged father possessions after his death. Over the objections of her domineering mother, she goes to the apartment, only to discover that her father is still present as a spirit who leads her through a complex exploration of her sexual and personal identity.

That summary? I would watch that movie. I got almost zero of that info from the trailer. That’s just bad marketing 101.

Jen: Ummm… there’s a lot going on there. I’m going to pass.

Loren: I said it last week but this sort of reinforces it. I dig that all these other types of movies are coming out of India. This film once again isn’t necessarily for me, nor can I tell if it handles the subject matter well, but at least it is handling it.

The Lady™: I super agree with Loren, Indian cinema’s stepping it up lately! Happy to see it, not actually gonna watch it.

Jen: Great! I’m glad this movie exists, even though I will never see it.

Loren: That wasn’t so much a trailer as it was a raw look at how excruciating Parkinson’s can be for someone. It probably served it’s film better than any trailer would.

The Lady™: That was brutal. The people that deal with these kinds of diseases usually gain more strength, grace, and humor than most people would throughout their whole lives. Please excuse me while I go ugly cry.

Rick: I kind of want to watch the short this is based on, but I’ll hold out until I see the feature.

Loren: I feel like they’re trying but this is going to come off as offensive.

The Lady™: Oh no. No. No, thank you. Too many stereotypes for one trailer.

Rick: There’s an audience for this, but it is not me.

Jen: Hmmm a lot to unpack there.

Loren: I feel like even in super rural Indonesia if you are riding a donkey around with the severed head of your attacker, you’re going to be at least questioned by the authorities. Don’t get me wrong, I’m glad she has his head, but I think someone is at least going to ask her about it.

The Lady™: I can’t make a comment here that won’t be offensive to someone. Murder is bad, but decapitating your rapist seems pretty good, so…

Jen: There’s just a tad too much decapitation for my tastes.

Loren: I was really hoping this would be about a regular lobster that is somehow a cop. Like not an anthropomorphic one, a real lobster. But he has a grizzled partner and everything. Play it completely straight, except for the lobster part.

The Lady™: Is this not about a real Lobster becoming a cop? Boo! I’m out.
(J/k, I watched the trailer, and this actually looks really fun!)

Rick: I’ll likely watch this at some point, but I would pay cash money immediately to see Loren’s version.

Jen: So this is NOT a sequel to The Lobster? Damn. However, this doesn’t seem un-entertaining.

Incident in a Ghostland

Loren: I’m a little confused. This is like that season of American Horror Story where it was everything all thrown together. I can’t really tell if this will be good because I can’t tell what’s happening. I guess that makes it bad.

The Lady™: I don’t do scary movies. But if I did, I’d probably like this a lot.

Rick: That looks fucking bananas. It’s either trying too hard or it’s purposefully nutty like John Carpenter’s In the Mouth of Madness. I’ll keep it on my radar.

The Lady™: I’m so sick of the “Women are crazy!” plotline. Move past it. There are so many other compelling ways to tell a story.

Rick: This feels like an early 90s direct-to-video thriller that would have starred Shannon Tweed, Lorenzo Lamas, and Jeff Fahey. Actually, I’d be more inclined to watch this if that were the case.

Jen: Where do I get tickets for the one Rick described?

Loren: This looks quirky but does seem like a refreshing take on a Western. That being said, I got a huge sense of impending doom for that miniature horse and I’m not sure why.

Jen: I’m not a big Western fan, but that doesn’t look too bad.

Loren: Independent Movie the Movie. And jeez, Christopher Plummer is in everything now huh? Good for him.

The Lady™: I like it! *this opinion may be heavily influenced by inclusion of puppies in film*

Rick: I got about a minute into that trailer before I had to set up my own boundaries.

Jen: Rick dropped the mic there; I have nothing to add.

Loren: I don’t think we need a grosser horror/thriller version of Lolita. I’m all set.

Rick: Feels like a Lifetime movie that got a little too full of itself. Pass.

Jen: I’ll just watch JLo in The Boy Next Door again, unless this is equally magnificent.

Loren: It’s no secret that the back half of the first season was pretty terrible, so I was a little afraid to see another superpowered bad guy for Luke to fight. But at least this looks like he’s more of a mob boss with powers and that’s very much Marvel’s Manhattan. Of course I’m in for this.

The Lady™: The only two Marvel Netflix shows I haven’t seen are Luke Cage and Iron Fist. I like it this way.

Rick: They really have nowhere to go but up after the first season’s garbage second half. And really, there’s no way it could be worse than Iron Fist.

Jen: I only got part way through the first season, it sounds like I picked a good place to stop.

Loren: I am really into how stand up comedy is changing. This looks pretty great.

Rick: Feels like more of a talk than stand-up. Regardless, it got my attention.

Jen: This looks great, more one-person show than stand up special, I’ll make time to check it out.

Loren: An interesting look at the typical love story for sure but I doubt I’ll ever give it the time to see if these two crazy kids can work it out.

The Lady™: Can we put my name under Jen’s, so I can constantly say “What Jen said”?

Rick: Seems like a good movie for a lazy Sunday afternoon. I’ll throw it in the queue.

Jen: If I had unlimited time I’d put this on my to watch list. It looks interesting, just not interesting enough to bump the million other things I’m not watching right now.

Loren: I like the people involved but this movie was shown at festivals in 2016 when Netflix acquired it and shelved it until this year. That’s not a good sign. I doubt I’ll ever give this one my time.

Rick: To Loren’s point: There never seems to be any rhyme or reason to when Netflix drops something, so I’m willing to give this the benefit of the doubt. I like a good medical mystery and the cast is solid. It’ll go in the queue.

Loren: Hilariously this is the only trailer I could find for this show. I guess they got too high to make a real one. Weed culture is the worst. I’m out.

The Lady™: There needs to be a “too many cooking shows” doc.

Jen: When do we send an expedition to Planet Cannabis? Sign me up.

From Hollywood,
–Loren, The Lady™, Rick, and Jen