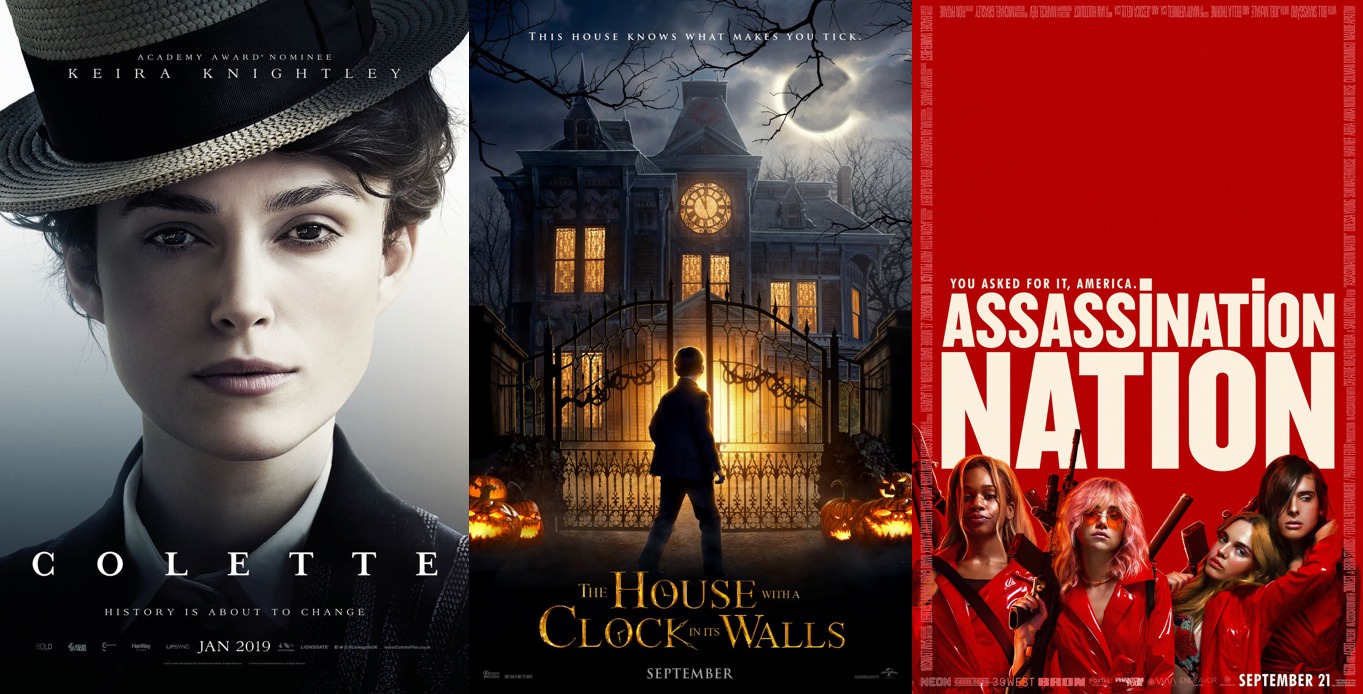 Jen: This looks delightful. I’m not a huge period piece fan, but this really drew me in. I didn’t know Collette’s story other than writing the Claudine books and Gigi, but would love to see more.

The Song of Sway Lake

Loren: Say what now? It’s sad that sometimes I can’t tell if a movie is being artsy because it’s actually artsy or if it’s doing it because it THINKS it’s artsy. Also is that Russian kid going to bang that old lady? Look it’s 2018, you do you, but that’s definitely the vibe I got.

RDT: That’s Rory Culkin, with the hair! I have no other thoughts about this movie.

Jen: This is the first of two trailers this week to feature old-timey music as a plot point (see Miss Granny below) I wonder if this is a new trend?

Loren: I’m also really into that. (Way to go movies this week! You’re not all awful like usual.) I always like John C. Reilly when he’s not playing something too over the top, plus I dig the rest of that cast in these roles. On top of all that a good Western that’s a little different can be a  fantastic way to spend a few hours. In.

RDT: That’s a fun trailer. I’m not much of a Western guy, but I’ll give it a shot eventually (or likely completely forget about it).

Jen: I was going to write pretty much exactly what RDT wrote. But replace “guy” for “gal”

Loren: This feels like the extras from Game of Thrones got together on their breaks to make their own movie.

RDT: Can I just watch Robin Hood: Prince of Thieves instead? (Please note, when the upcoming Robin Hood reboot is released, I will likely say the same thing.)

Jen: I watched this and then 5 minutes later forgot what it was. I’m sure it’s a fine sword-and-sorcery thing? Or medieval war? Or about a cult? I guess I’m not going to be seeing it anytime soon.

Loren: I’ll go into a little more depth than RDT here. I want this to look better, right now it looks like a slightly more violent CBS show. Like a CBS All Access show. With just a little bit more of a budget this might have been a good little action thriller but as it stands? Yeah.

Jen: I don’t get the occasion to seek out much International cinema, unfortunately. So when I do I don’t really want to use that time on a warmed-over version of a Samuel L. Jackson movie.

Jen: This does look well shot and sweeping and such, but, honestly, I’m never going to see it.

Tea With The Dames

RDT: Yeah, that looks damned adorable. I’ll keep it on the radar.

Jen: 100% That trailer alone is the best thing I’ve seen in ages.

Loren: I can’t tell if Saamy Squared here is supposed to be serious or not. Not that it matters but I just want to know.

RDT: Never seen a Bollywood flick. This likely won’t be my first.

Loren: That feels like a mashup of like 13 different movies. There’s a little Click in there, some Back to the Future, a dash of 17 Again etc. I doubt I’ll be seeing this one. Or the American remake of the Filipino remake.

Jen: This is a Filipino remake of a Korean movie with English subtitles. It does look cute though. Who am I kidding, I’m never going to see this.

Loren: Whoops, looks like I picked the weird music video trailer instead of the trailer. Oh well. Mostly this just lead me to think that I guess Emma Roberts bought a boat.

RDT: I don’t understand this trailer/music video/scene from the movie. So, I will politely pass (and order a shitty takeout pizza).

Jen: Is that a Shawn Mendes video or a movie trailer? Or a segment from a Travel Network show about visiting little Italy? Whichever, I’m a no.

Loren: That’s a lot of beards. This isn’t even a little bit in my wheelhouse but there’s something there. I don’t know that I’ll see it but you never know.

RDT: Does this look great? No. Seems cliched as hell. But I like the cast, a lot. And I love This Is Us (the creator, Dan Fogelman, wrote and directed this). So, yeah, I’ll give it a shot. Maybe even this weekend!

Jen: Wait, are you trying to manipulate me emotionally? I have the feeling there’s some tragedy in this that I’m not up for. Maybe I’ll just try watching “This is Us” instead.

Loren: Whoa. Ok you have my attention movie.

RDT: I stopped the trailer about ½ way through. I’m in and I don’t want to know anything else about it.

Jen: That is an excellent trailer. I really want to know more. And I can’t resist Peter Dinklage. In.

Loren: Though I love stand up, I’ve never been a Hughley fan. Pass.

RDT: I briefly worked on The Hughleys. So, I’m good.

Loren: I’m not the target demo for this in the slightest. It looks like a perfectly cromulent movie.

RDT: Not sure I can really relate to the topic. That being said, it doesn’t look bad at all.

Jen: This looks like it could be some fun ‘husband is out of town and I’m looking for some girl-power entertainment’ watching.

Loren: Superbad 2 looks weird you guys. I know that The Lady™ was interested in this, I think I may wait to get her review before diving in.

RDT: I’ll add it to the list, but may never get to it. Or, I’ll binge it this weekend.

Jen: This could be great or terrible, I’m not a Jonah Hill fan per se, but the style of this might get me to watch it anyway.

Loren: I don’t know, that looks kinda fun and I actually like Josh Groban as an actor. I wonder if they’ll get him to sing at some point. Sure why not.

RDT: Is this part of the Good Wife cinematic universe? Seriously, I’m surprised the ‘flix is dropping 2 high profile series in the same weekend. Meh.

Jen: I appreciate the consistency of Tony Danza’s character being named Tony.

Loren: I learned all I need to know about Quincy Jones from Fresh Prince of Bel Air, thankyouverymuch.

RDT: Too many docs. Also, where’s my Quincy MD reboot???

Jen: This looks like a pretty by-the-numbers music doc, but the fact that his daughter is one of the directors makes me wonder if there’s more to it than meets the eye. I’m curious.

Loren: That looks like a very well produced documentary about a woman who’s had an astounding life.

RDT: Too many docs…..but this one may move up the list….

Jen: I recently listened to a podcast about Jane Fonda (You Must Remember This  – absolutely worth checking out) and her life is fascinating – she really has gone through so many chapters and I’m very interested in hearing her stories in her own words.

From Hollywood,
–Loren, RDT, and Jen