Rick: How negligent is this dog’s owner by not giving it a collar with a license and/or having it chipped? Isn’t that the law everywhere now? F this guy and F this movie.

Jen: I zoned out halfway through Act 2 of that trailer. If I ever want to watch a movie like this (and I don’t) I’ll rent Homeward Bound. Aw, how adorable of me to say “rent” instead of stream.

Jen: What is Nicole Kidman doing here? OR Bryan Cranston for that matter? Or I guess a better question is why is Kevin Hart there? This whole thing is warmed over treacle I’ve seen 100 times before. I’m surprised at how strongly I feel about not liking this movie.

Rick: I had the same reaction as Loren, but I kinda want to know what the hell is going on here.

Jen: This feels very much like an Art Film.

Rick: I’ve been watching a lot of action movies lately, mostly older stuff from Hong Kong that has been sitting on my shelves for ages. Van Damme tends not to do darker-themed flicks and I’ve never heard of this director, but I’m more than happy to throw in some newer titles to mix things up.

Loren: Is Vanessa Redgrave doing the books at a race track? Is Jonathan Rhys Meyers channeling Christian Slater? All these questions will be answered in The Aspern Papers!

Rick: Man, Jonathan Rhys Meyers is trying way too hard to put on an American accent. It’s incredibly distracting. Also, I can’t bring myself to care about this story. Pass.

Jen: I wondered if I’d notice the accent after reading Rick’s comment, I’m not great at picking up on that sort of thing, but sheesh that is… not good. This looks like a waste of Vanessa Redgrave to me.

Loren: All I can think about is that this is Country Music the PTSD movie. And that movie is not for me.

Rick: It’s probably moving, but it’s not really treading any new ground. I’d rather just donate to a veterans charity.

Jen: Pass. Feels like every other movie of this ilk. Having Gary Sinise in it does give it some extra soldier cred though.

Loren: There’s an interesting sci-fi movie buried in there somewhere. But overall this looks pretty weak.

Rick: There are some dodgy special effects in that trailer, and the concept isn’t exactly new, but I’m willing to give this a shot. Mostly because I’m thirsty for some halfway decent sci-fi.

Jen: Hahahahahaha slow clap for the marketing department on this one – https://www.cinemablend.com/news/2464790/keanu-reeves-replicas-is-making-smart-use-of-rotten-tomatoes-in-its-ads

Rick: I would have accepted this concept and tagline if it were made in 1985, but you gotta try harder now, kids. Sheesh.

Norm of the North 2: Keys to the Kingdom

Rick: Wait. The first one was successful enough to warrant a sequel? They must have produced it for $20 and the cost of the family size bag of Hot Cheetos to satisfy Rob Schneider’s rider.

Jen: Wait. There was a first one of these? Really? Huh. No.

Loren: Are they still cliches if they are done in a foreign movie? Oh they are? Cool.

Rick: Is this the Manilan version of Police Academy? Doesn’t matter. Even if it was I’m not on board.

Jen: This trailer got a lot of laughs out of me, unfortunately they were all at the super-cheesy American voice over.

Loren: This trailer is so over the top and ridiculous that I’m kinda into it.

Rick: I’m willing to look past that overwrought trailer and give this one a shot down the line.

Jen: Well, someone sure was inspired by the second season of Westworld.

Ashes in the Snow

Loren: Yeah like my colleagues below I’m not that into this. I’m sure it’s a good representation of the tale but I’m just not in for it.

Rick: As much as I like Bel Prowley (Diary of a Teenage Girl, Carrie Pilby), I’m more than okay with skipping this.

Jen: I think it’s been a couple of weeks since we’ve had a WWII trailer to review, but I’m still on WWII hiatus at the moment.

Loren: I have a lot of other Godzilla media to get through before I make it to this one.

Rick: Fan reaction to this set of anime movies has been divisive to say the least. They’re certainly not flawless, but I’m enjoying them so far. I’m anxious to see how the story wraps up. 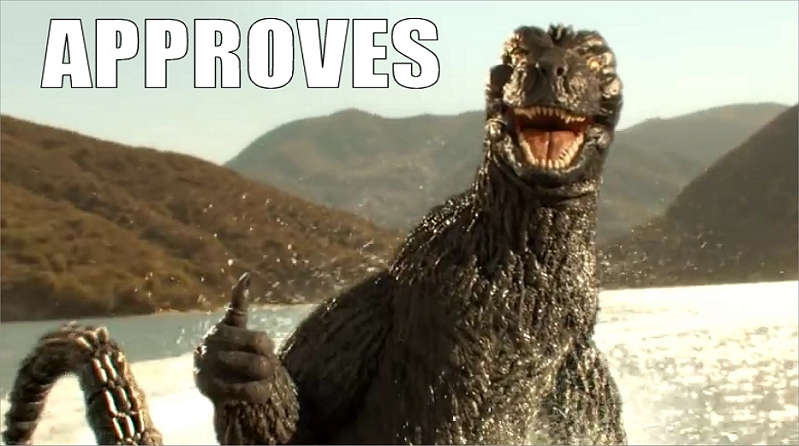 Loren: This show didn’t get cancelled huh. Who knew?

Rick: Was not the least bit interested when the show debuted. My opinion has not changed.

Jen: I slogged my way through the first season of this based on the good will I had for the cast (Keegan Michael Key, Cobie Smulders, Fred Savage, Billy Eichner, Nat Faxon – that’s pretty stacked) but I don’t know if I want to spend any more time with these unlikable people.

Loren: Did you guys know that Asa Butterfield and Gillian Anderson are dating after this? I mean, it’s not true but you thought it was for like half a second didn’t you?

Rick: I love me some Gillian Anderson, but I saw this back in 2007 when it was called Charlie Bartlett. Pass.

Jen: This feels a little too adult for kids, but a little too immature for adults, not sure who the target audience is, and yet… Gillian Anderson <3 <3 <3

Rick: I stopped watching the trailer when they rolled out the ol’ chestnut of old people don’t know how modern cars work. GFY, The Last Laugh.

Jen: Why is Netflix trying to force old white guys down our throats? Metaphorically, that is. I’d rather have another Grace & Frankie than another Kominsky Method.

Loren: I think The Lady™ watched season one. I did not, so there for by the law of the land I shall not watch season two.

Loren: I’ve been looking forward to this for a while. Here’s hoping it lives up to the hype.

Rick: Word is this is kind of a loose remake of the first season. I mean, if you have to imitate something…

Jen: Mahershala Ali is a big draw – will this be Season 1 good, Season 2 bad, or somewhere in between. I’m hopeful but not naive.

Loren: Oh look another Amazon Prime show I will completely forget about in 3…2…1…

Rick: Hey! It’s Bel Prowley again. This looks decent, but I have a few other BBC dramas way ahead of this in the queue. Also, Jen, you’re the best (see below).

From Hollywood,
–Loren, Rick, and Jen