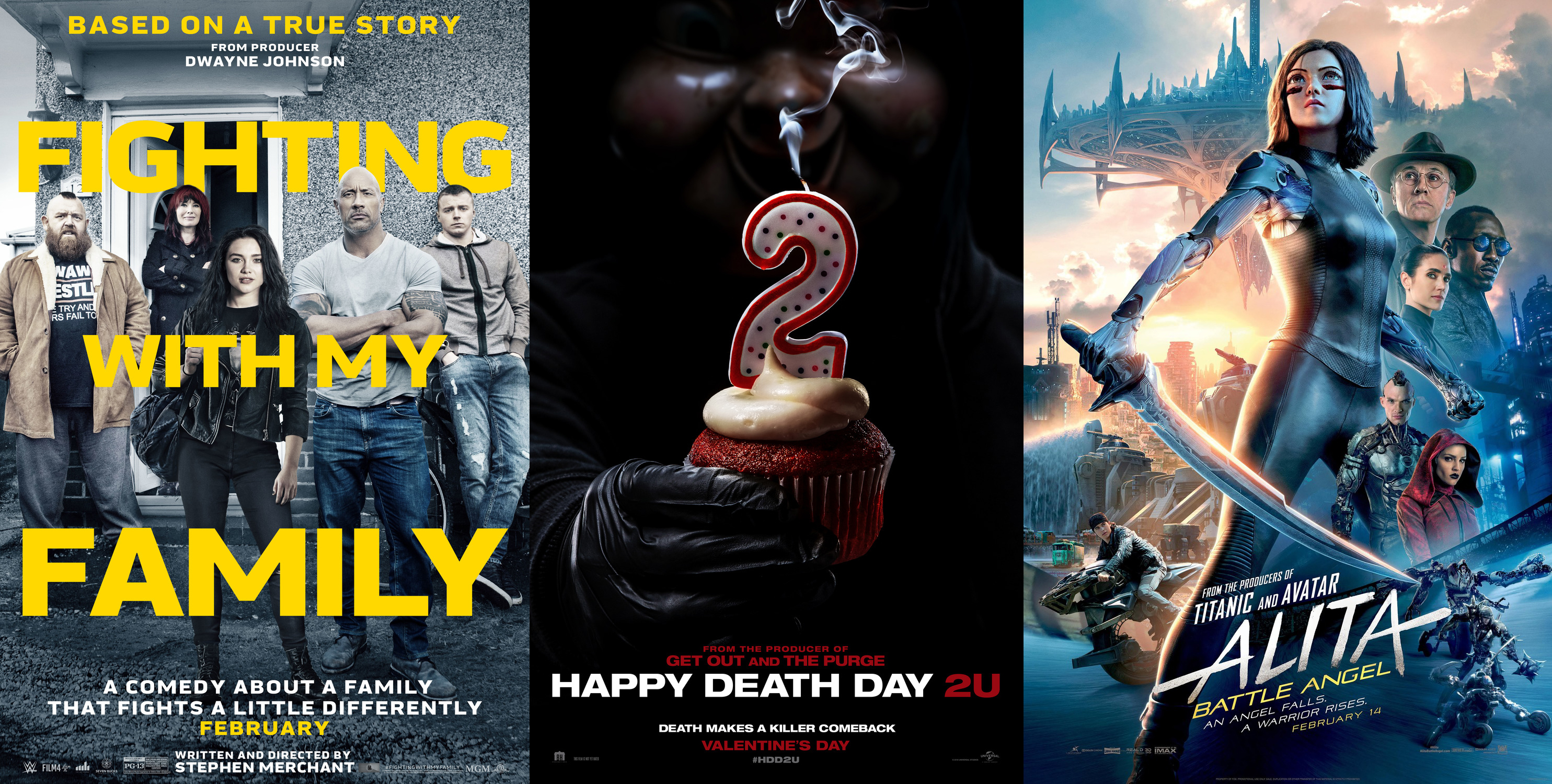 Loren: I can’t tell if they shrunk the eyes back down a bit or I just got used to seeing it that way from when they started promoting this flick. Either way in a post-Avatar world I don’t have all that much faith in Cameron, though he got the action right in that one. Shit I don’t know, maybe on this?

The Lady™: This has elements of everything I love: dystopian future, Blade Runner/Fifth Element-esq cityscapes, ‘more special than she even knows’ heroine, hidden pasts, bio-mechanical upgrades. I’m genuinely surprised I’m not chomping at the bit for this one. But unless it gets spectacular reviews, I’m saving it for streaming.

Rick: The eyes have been adjusted so the irises are more proportional to the rest of the eye design. It gives the illusion they’re ever so slightly smaller, but they’re the same size as in the original trailer. I like anime, but the eye size does not translate into real life. Plus, there’s no story element that requires her eyes to be oversized. I get that they were trying to keep with the original art style, but they could have utilized another common anime technique and given her unusually colored eyes, or reshaped the iris inside a normal eye to define the look. I like everything else going on here, but the eye design kills it for me. It’s too distracting.

Loren: I actually enjoyed the silliness of the first one and the sequel looks like a lot of fun. I like how it amps up the concept. Probably not in the theater but I’m in.

The Lady™: I never got around to watching the first one.

Rick: You can read my rant about the first movie here. I’m definitely out for the sequel.

Fighting With My Family

Loren: It’s really interesting to me that we’re getting a biopic about Paige who is only 26 but her career as an in ring performer was tragically cut short. (Concussions and a bad neck.) The casting is all pretty good here, I’m sure Saraya loves that Lena Headey is playing her. If you’re are interested in the real life story the family made a doc about themselves a while back that’s online. As far as the movie goes it looks good enough and DTRJ’s addition will certainly help it along.

The Lady™: Being Loren’s girlfriend means I accidentally got into wrestling. And I like Paige. You know I’m going to see this whether I like it or not.

Rick: I’ve been meaning to ask Loren and/or Shmim Shmavis about this story. Given Loren’s endorsement, I’ll give this a shot via one of those fancy streaming services I keep feeding my money to.

Loren: These kind of slice of life, tragic love stories are not my bag. And unfortunately from that trailer I can’t even tell if this is anything different or like, acted well. It looks pretty run of the mill to me.

The Lady™: It’s been a while since I’ve had a good ugly cry. Maybe this is the one for me?

Rick: This movie is going to hurt my heart, isn’t it? Goddamnit.

Loren: Look, I like a dog movie where the dog is almost guaranteed not to die but this just looks awful.

The Lady™: I can’t get behind a movie whose premise is “I don’t like dogs.” Who doesn’t like dogs??!!! You’re clearly a sociopath pretending to be a normal lady.

Rick: Nope. Not even a little bit.

Loren: I was all set to be like ‘this movie is going to be terrible’, but I don’t think it is. It’s gorgeously shot and looks to be wonderful performances from the cast. I’m kinda super in to that.

The Lady™: For a second I thought the woman singing the national anthem was Stockard Channing. It wasn’t.

Rick: I’ve been keeping an ear to the ground for this since it debuted at Fantastic Fest last year. Definitely in.

Asterix: The Secret of the Magic Potion

Loren: I never got into Asterix when I was young, probably because, contrary to popular belief, I’m not French. This looks… not great, but maybe it’s a cultural thing.

The Lady™: Alas, I am also not French, nor a child. But that baby warthog(?) is freaking adorable!!!

Rick: It looks kind of cute, but with the backlog of animation I have in my various queues/home library, I will probably never get around to this.

Loren: You’ll want to put the subtitles on for that one. Or don’t. It’s your life. I’m still trying to figure out what’s going on here, but it looks good. I mean, up until that horrifically CGI’d wolf. That shit was bad.

The Lady™: I really love the way this was shot. Those hazy grey blue colors and sweeping slow motion movements remind me of a lot of British shows. As for the plot? Hard pass. Evil kid is evil. We get it.

Rick: Despite the dodgy wolf, I’m going to keep an eye out for this one. It has just enough of “what the hell is going on here?” to keep me interested.

A Tuba to Cuba

Loren: I think it’s really cool that we’re finally able to get a look into Cuba. As far as this doc goes, it’s a streamer if anything.

The Lady™: I’ve never been a huge fan of Jazz. If Loren happens to be watching it I might pay attention. Or I might not.

Rick: I’m unlikely to watch this, but I’m glad it’s out there. It also serves as reminder to myself to book a damn trip to New Orleans for Jazzfest.

Loren: I am really happy this project is a thing, but I don’t need to watch a movie about it.

The Lady™: (see Rick’s response) Right?! My entire reaction was, “Is this a movie or an infomercial?”

Rick: Is it me, or does that feel like a pitch package you make to get funding? Or maybe an ad for an organization, not for a documentary. I’d be more inclined to see it if they actually showed me footage from the doc. I mean, the project has incredible merit, but this does not inspire me to watch.

Loren: I appreciate a well shot reality show. You rarely see that in docuseries because of the cost. I don’t know if the subject is something I need in my life but I’m glad it’s out there.

The Lady™: A huge round of applause for this show!! They’ve somehow managed to not have this look like the cheesiest most awful thing in the world. AND to include a solid mixture of race, sexuality, and age in their casting? I might watch this on principle alone.

Ken Jeong: You Complete Me, Ho

Loren: Ken Jeong is a funny actor and quite the story, I don’t know if that’ll translate to stand up but we’ll see.

The Lady™: Didn’t love him on Community, don’t love him as a stand up. I’d much rather watch a documentary chronicling how he went from being a doctor to a comedian.

Rick: This got a few laughs out of me, so it’ll wind up in the queue for a night of laundry folding, but why the hell does it sound so hollow? Who mixed this?

Loren: A fascinating concept for sure. Will I take the time? Unclear.

The Lady™: This makes me weirdly uncomfortable. For some reason I’m great with comedy *about* war, but comedy *in spite* of war doesn’t work for me.

Rick: Okay, that has a great hook. I may not watch every episode, but there are a few in there I’ll be checking out.

Loren: What a roller coaster. I was out, then in, then out, then in again. I’m exhausted.

The Lady™: Does this look really amazing or really terrible? Do I want to like it just because I love Taika Waititi so much? Will someone please watch this for me and tell me if it’s any good?

Rick: This is kind of a brilliant idea. In the queue it goes.

Loren: I never read the comic this is based on but I feel like maybe I should have. I’m in for this though.

The Lady™: FINALLY!! Time was dragging so slowly from when they first announced the show until today. I love love LOOOOOOVE this comic. I’m into this, on top of it, rolled up in it, and ready to go!

Rick: I was ready to be ‘meh’ about this, but came away pleasantly surprised. I won’t jam through this like other shows, but I’ll give it a go. Crap. That reminds me. I still haven’t finished Chilling Adventures of Sabrina.

Rick: Like I always do with this show, I will wind up watching clips on the YouTubes.

Loren: This looks like a deep cut into the story, but does it have any balls?

The Lady™: Oh man. I remember when this all went down. Even as a kid I started to wonder, how far had he pushed her that she would do something like that? It seemed more like a desperate act than a violent-natured one. I’m so ready to watch this, especially because I’ve been fascinated by her since so long.

Rick: *slow clap for Loren* I was in high school when this happened. Even without the 24 hour news cycle we now have you couldn’t escape it. I have no desire to dive deeper into this well, but if it helps get better discourse rolling about domestic abuse I am all for it.

From Hollywood,
–Loren, RDT, The Lady™, Rick, and Jen