This week the guys have a TON of news coming out of Disney’s D23 Expo 2017 so they’re covering news bits like:

All that plus the guys talk Spidey Spoilers at 1:27:19 and of course all the tangents.

This week Loren’s back from #SWCO and he’s got stories. Well maybe more like tales. Couple that with some tangents about bad airlines and the week’s news and we’ve got a podcast. What news you might ask? How about news bits like:

All that, the Weekly Watched, and all the tangents you know and love. 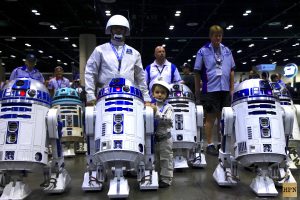 And now something a little special. We grabbed pictures of all the coolest droids that we saw at Celebration this year. If this gets a lot of attention, maybe a Droids of Celebration Orlando calendar is in order. Nah, that’s probably too much, but then again…

When this teaser debuted at Star Wars Celebration Orlando I was on the show floor looking at a $2,200 Jawa action figure (and then laugh-sobbing at the fact that I had the same one when I was a kid). There was a stage on one side of the floor for The Star Wars Show Live that had a huge viewing screen. As people started to notice the new trailer was playing on it, they stopped what they were doing and payed attention. By about 15 seconds in, the whole convention had stopped and were all staring at the screen. It was a sight to behold. I know all of the convention goers were there for Star Wars-related reasons, but this still shows how effective the trailer is. Even the merchants that were there to sell us $2,200 pieces of our childhood stopped hocking Wookie backpacks and Vader plate sets to watch in relative awe.

On top of all that, it looks good! I like The Force Awakens but I can see it’s flaws. It has too many call backs and feels all too similar to A New Hope. But the small amount of footage we see here in The Last Jedi looks fresh and new. It got me excited to reconnect with these new characters on their journey with the Skywalkers. I will say that there is a bit of an Empire Strikes Back feel thematically to the story, but it doesn’t seem to be beat for beat. I think a lot of this has to do with director Rian Johnson‘s vision taking over from where J.J. Abrams left us. 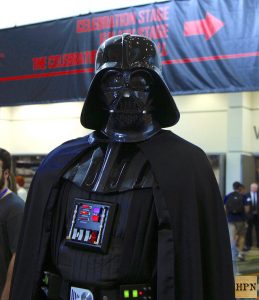 We were lucky enough to be invited to Star Wars Celebration Orlando this year. It was an extra stroke of luck that this year marks the 40th lifeday of Star Wars. There was so much to see but what always catches our eye is the amazing cosplay from the fans. Here’s some of the best that we saw and also an easy link to follow to view them on imgur.

From Hollywood via Orlando,
-Loren

Check out the brand new Star Wars: The Last Jedi Trailer that debuted this morning at Star Wars Celebration Orlando!

Earlier today Billie Lourde came out on stage dressed as Princess Leia to pay tribute to her late mother after the 40 Years of Star Wars panel. It was touching, sweet, and funny. Following her speech the crowd was treated to the excellent tribute video above. The video was even simulcast onto the showroom floor so everyone in attendance of the convention that couldn’t get into the panel (ahem *me*) could see it. The whole floor came to a halt to watch and pay their collective respects to the late, great Ms. Fisher. It was a wonderful way to kick off Celebration.

From Hollywood via Orlando
-Loren

We got your pop culture news right here. But don’t worry, there’s still plenty of tangents to be had. Check out news bits like:

All that, plus the usual tangents.

This week the guys are talking a little known SciFi movie that hit the cinemas a few of you may have seen… Rogue One (Spoilers from 01:17:00 – 01:24:45). Also all the news bits from last week like:

All of that plus the Weekend Watched and all of the usual tangents.