The guys are still socially distanced but the news is starting to trickle back in. They’ve got stories like:

All that, a supersized Weekly Watched and tangents galore!

Don’t forget to rate/review us on Apple Podcasts, Stitcher or wherever you get your podcasts. We’d really appreciate it!

As we head into week 2 of the “safer at home” lockdown, the guys cover off on what little pop culture news there is.

All that, what we watched and some tangents (there’s no money in the Cocoa Pebbles box). Welcome to the Weekend Watch, where we try to point you toward the best ways to spend your viewing time (or, at least, steer you clear of the garbage). In light of the global health crisis and the consequential movie theater closures, this week we wanted to each recommend some quality streaming content you might enjoy. END_OF_DOCUMENT_TOKEN_TO_BE_REPLACED

This week is a little bit different. Loren records a short episode on his own amid the social distancing created by the Covid-19 Pandemic. He talks about:

All that, plus Loren’s Weekly Watch and a message from The Wu Tang Clan. Stay safe and healthy out there everyone and we’ll hopefully be back to full force next week. Loren: So we missed this last week, sorry about that. It’s doing well though so maybe we won’t miss seeing it this week.

Rick: I’m always happy when something original comes out, but this isn’t ringing my bell. I may throw it on once it hits the Disney+, but I’m in no hurry to see it.

Jen: This feels like it’s right in my wheelhouse, Pixar, fantasy, a hot Chris… but I’m probably going to wait till it’s on Disney+ and watch it with my family rather than blow money at the theater.

Loren: I never got into this or really any of the Valiant Comics. I was mostly a Marvel/DC and Image kid. Where are my good Image adaptations? Anyway this looks pretty ok. Not amazing or anything just ok. Also, since when does Winny the Bish have a British accent?

Rick: Pretty certain I have a good chunk of the original run of this comic boxed up somewhere. Haven’t read it in close to twenty years, so I can’t comment on the quality of the adaptation, but I feel like we got all of the big action pieces in the trailer. And given that there’s been zero buzz around this release, my guess it’s mediocre at best. I’ll watch from my couch.

Jen: I was sure I’d have zero interest in this film, but, aside from Vin Diesel, I was interested. Not run-to-the-theater interested, but certainly on-my-couch interested. The rest of the cast looks fun, no one is taking it too seriously and the premise, which is similar to so many films, seems to mash them together in a way that appeals to me.

Loren: I’ve gotten so accustomed to seeing  KJ Appa with that horrible Archie hair that he looks weird when he has normal hair. Also this looks terrible.

Rick: A faith-based movie disguised as a sappy romance. Super-meh.

Loren: I’m not going to lie, the marketing on this has sort of worked on me and I’m curious. Not $20 curious, but I’ll probably see it eventually.

Rick: I’m glad this is getting released. By all accounts it’s actually good. I’ll make time for this one.

Jen: I love Betty Gilpin and this looks like an awesome vehicle for her, but not sure I need this much violence with my satire.

END_OF_DOCUMENT_TOKEN_TO_BE_REPLACED

The guys are back with all the entertainment and pop culture news from the week that was. They also talk about a litany of other things so jump on in and check out stories like:

All that, the Weekly Watched, and obviously tangents!

Loren: Not really my cup of milk per se but it looks excellent.

RDT: I have no thoughts. No feelings. No opinion or snarky comments. This is a movie. Good for it.

Rick: Kelly Reichardt is kind of a master at quiet character dramas. There’s nothing flashy or overwrought in her style. She’s incredibly deft at eliciting strong performances and letting the camera act as an observer (Michelle Williams in Wendy and Lucy and Kristen Stewart in Certain Women are particular standouts). You can’t go wrong with anything she’s directed, and I suspect this will be just as satisfying an experience.

Jen: I, like AJ, really thought this was about a cow president. However, this looks much quieter than that would, no doubt, be. This does look like a lovely little film I just can’t see myself running out to see it.

AJ: Oh goodness. I have seen many of the rave reviews on this and obviously the trailer is peppered with some seriously enthusiastic critic quotes. But all of it is lost on me. I just cannot get into this. And how is a movie called First Cow a period drama and not a Jim Carrey/Jonah Hill vehicle about a cow accidentally being elected to the White House? (Which, let’s face it, would be preferable to what we’re currently working with.)

Loren: Hey you guys ever see a sports movie? Also I just have a bit of an issue with Affleck these days. I don’t think this one is going to be for me.

RDT: I’m a sucker for a good sports movie which is, I think, ironic given how much not a sports guy I am. And, I like Ben. His brother seems like a real piece of shit. But I’m pulling for the elder Affleck.

Rick: So, it’s basically a riff on The White Shadow/Hoosiers, but with addiction thrown in. Not that that’s a bad thing. If you have to borrow, borrow from something good. It’s challenging to make a sports movie stand out. You’re ultimately tied to the “will they or won’t they win the big game” element. Everything else comes down to character. Not sure I’ll ever see this, but I’ll keep an eye on reviews.

Jen: I feel a good amount of credit is due to the fact that Ben Affleck, a real-life addict, is dealing with his personal demons in such a raw way through this story, but that being said I get it, they’re scrappy underdogs.

AJ: If addiction wasn’t present in this story, I would guess it was one of those sentimental Disney live action sports flicks like Remember the Titans, Million Dollar Arm or The Rookie. And that’s not a bad thing. Looks like a really strong performance from Affleck whom I believe is capable of way more than that mediocre-at-best Batman, so it’s nice to see. 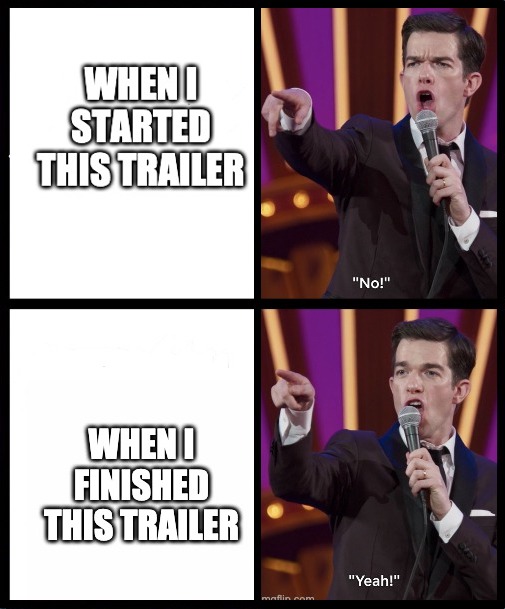 RDT: At first, I was all “Too artsy fartsy.” Then I was all “heisty-weisty?” And, by all accounts, Mick Jagger hasn’t given a performance of this level since Freejack.

Rick: I enjoy a good heist, and I’m a sucker for them if there’s a long con involved. I’ll give this a spin.

Jen: It seems like this trailer is hiding some more details about the plot – some bigger twist and I like that they aren’t giving away the farm here, but the only thing that really drew me in was the fact that Mick Jagger is involved. How good was the script that he decided THIS would be his return to acting? Although, I guess I thought the same thing about The Man From Elysian Fields and that film did nothing for me.

AJ: MICK JAGGER?! Okay, let’s just shove that to the side. And the weird title – let’s shove that aside, too. And also — never mind. I’m never going to see this. That trailer bored me. END_OF_DOCUMENT_TOKEN_TO_BE_REPLACED

After the guys debate how restful a coma would be, they do a deep dive into the world of pop culture. Special cameo by my dog, Chuck!

All that, what we watched and all those tangents.