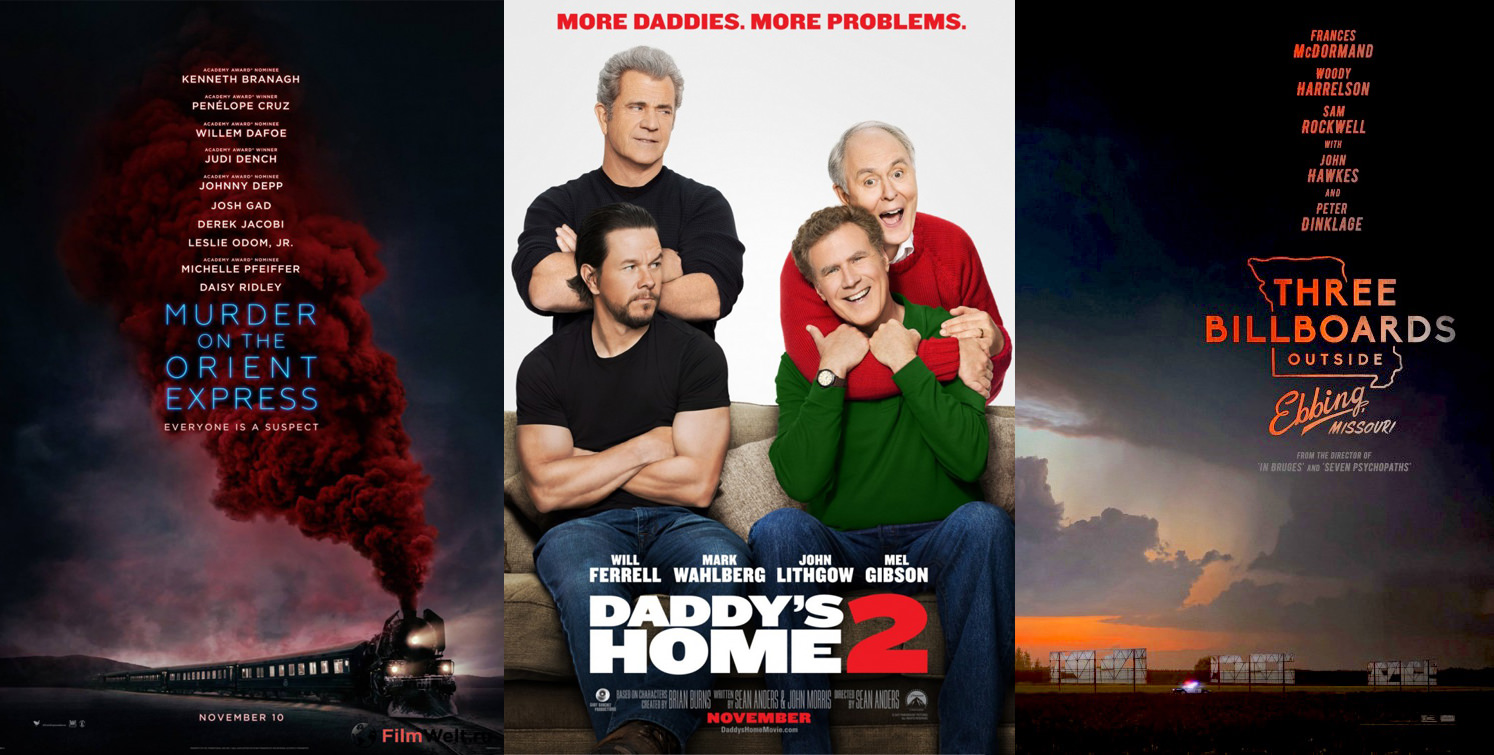 Murder on the Orient Express

Loren: I love this story, and am excited to see it play out with modern film techniques. I’m not sure I’ll make it out to theaters for this one but I’m definitely seeing it.

RDT: I just cannot get over that mustache. It takes me out of it every time I see it.

Rick: I have nothing but love and admiration for said mustache. Also, I love that I live in a city where I can see it projected 70mm. Definitely seeing this one in theaters.

Jen: YES! I’ve been looking forward to this since the trailer dropped. The cast is fantastic and a locked room mystery is to enticing to ignore.

Loren: Nope. Even without the Mel Gibsonness of it, I wouldn’t want to see this one.

RDT: Ok, so I saw parts of the original on my cruise last year and it was…fine…when you’re stuck in a room with nothing else to watch. As for this, meh. It doesn’t look great, and I’m not quite back on the Mel Gibson bandwagon yet.

Rick: Not even John Lithgow’s presence is enough for me to give this a shot.

Loren: That looks like a pretty decent Biopic, but I had a lot of trouble getting past Burn Notice as Kennedy. Solid maybe.

RDT: Another awards season, another biopic in which I have no interest.

Rick: Apparently Woody Harrelson is great, but not much else is. I’ll wait for a screener.

Jen: MAYBE! LBJ is a fascinating figure and Harrelson has the style to play him (there’s a thin line between Johnson and Larry Flynt) but this trailer doesn’t show me that they want to go as far as they should. This is a time period of US history that I am obsessed with so I’ll likely give it a go based on that, but my expectations are tempered.

Loren: I think the more eyes on science the better. I’m glad Bill Nye is out there trying to educate stupid people. You know, like Piers Morgan and other such morons.

RDT: I once saw Bill Nye at a bar in the Valley, here in LA. Dude was pulling mad tail. For reals, he was surrounded. And, apparently, that was a regular occurrence there. Ladies must really love science.

Rick: I appreciate all the man is doing/has done in the name of promoting science education, but I will probably never get around to this.

Jen: We do love science! Bill Nye is a great face and if he can change minds on climate change and inspire young people into the STEM fields or even just to be critical thinkers, than he’s earned the love of the ladies, and the gents for that matter. However, I’m a little wary of pop science in general as it can easily be wielded in the wrong direction so while Bill Nye is great, his progeny could be less helpful to the scientific world at large. So I’m a mixed bag here.

A Bride for Rip Van Winkle

Loren: What? Actually, you know something, don’t tell me. I’m never going to see this movie.

RDT: I know I usually don’t read my movies, but that kind of intrigued me. If it stays on my radar, I’ll catch it streaming.

Rick: I think I’m with Loren on this one.

Jen: That looks gorgeous. If it’ll get RDT to read subtitles then there’s got to be something there. Color me intrigued.

Loren: My Father’s aunt and uncle were holocaust survivors. They never spoke about it to me. I wish that they had just so I could have known what they went through, but I would never ask them to bring up such memories. This one hits close to home.

RDT: Definitely a story deserving to be told. I’m just not sure I’m up to watching it.

Rick: Looks like it’ll rank up there with other exemplary docs on the holocaust. Heart-wrenching, but stories that need to be told.

Loren: I don’t know that I want to see a movie about her being broke down. I think I’d rather go see a concert by her instead. What can I say. I prefer my entertainment entertaining.

RDT: I was a temp PA (production assistant) on the show Felicity back in the day. This was a time before iPhones/iPads and emailing pdf’s. When a script changed, I was one of a couple PA’s who would deliver hard copies of said script to cast and crew. Anyway, one night I had to deliver a script to Keri Russell’s house and I could not find it. It was Century City-ish, but the streets would stop/start and curve. It was so confusing and I just kept getting lost. I went to a couple wrong doors. Eventually, I think I found it, but it was pitch black and I couldn’t see the # on the house. Truthfully, I wasn’t even sure I was on the right street. So, I just left it sitting there, by the front door. I still have no idea if she ever got that script. For Scott Foley, you weren’t allowed to ring the bell. You just had to throw it over the gate. That was always fun. One time, his script almost ended up on the roof!

Rick: Something tells me this movie doesn’t have the happiest of endings and, honestly, I think I’m just going to read the wiki page to try and confirm my suspicions.

Jen: This looks beautiful and deep and like something I will probably never see. RDT, did you use a Thomas Guide for those deliveries? (RDT: I did! Most of the time it helped. With Keri Russell’s house, and, oddly, Ron Livingston’s house, it did not.)

Loren: It’s no secret here that I’m a huge fan of stand up, so it’s always intriguing to get a behind the scenes look at it. Gilbert has been doing this for so long, it’s great to see the man behind the act. Also, he’s my favorite part of The Aristocrats!

RDT: I’m definitely in for this. It’s funny (no pun intended), I’ve never really loved Gottfried’s comedy, but I’m intrigued by the stories about how he is off stage. I don’t know if I’m gonna rush out to see it in theaters, but I’ll definitely give it a watch once it streams. Also, how did he and Bobcat Goldthwait not costar in a movie in the 80’s?

Rick: I enjoy Gilbert Gottfried, but I think I’d prefer to watch a standup special over a documentary.

Jen: RDT hit the nail on the head, I’m not a Gottfried fan, but seeing the sensitive man behind the act sounds enlightening.

Loren: I feel like we just got a doc about the Armenian Genocide but this looks so much darker and more visceral.

RDT: Not for me, but again, definitely a story worth telling.

Rick: Architects of Denial was the other doc on this subject that came out this year. It being a big anniversary year, I’m surprised there isn’t more coming out. Regardless, this is compelling enough to give a look.

Jen: Yes, the story needs to be told and the way they are telling it brings you right into it.

Loren: I mean, good for Steven Yeun but isn’t this just the Belko Experiment?

Rick: Yep. Belko Experiment with a riff on the rage virus from 28 Days Later. Meh. Though, I just signed up for Shudder’s streaming service and it’s pretty great. Well, for horror fans. Not so much for anyone else.

Jen: What Loren said, this looks exactly the same but without the mystery box element.

Loren: Ah the age old tale of child neglect. But this time in black and white and German.

Rick: I feel like I’ve seen a movie like this from the 60s but I’ll be damned if I can place it. Regardless, if I remember it exists I may give it a watch.

Jen: I can’t sit through this. It’s too real. Even in black and white and German, it feels like it could be children I know.

Loren: This looks excellent and oh man, that cast. Sign me up!

RDT: I know very little about this movie, other than it keeps popping up as an awards contender. I think I watched an earlier trailer, but don’t remember it. Regardless, I’m super in.

Rick: I’ve been a ‘yes’ for this movie since the first trailer dropped like six months ago. Gimmie.

Jen: Frances McDormand is amazing. This looks like it will make me rage, cry, and even giggle a little. What else could you want in a movie-going experience?

Loren: I’m really digging the resurgence of the western. The Brazilian twist is pretty interesting too. I think I’ll check this out.

RDT: My queue is already ginormous. So, unless buzz is amazing, I don’t see myself watching this anytime soon.

Rick: Already in my queue.

Jen: Looks good, just not my cup of tea.

Loren: I like Bamford a lot but the show didn’t resonate with me. I don’t think I’m in for this.

RDT: I acknowledge that Maria Bamford is objectively talented, but I just have never really enjoyed her brand of comedy.

Rick: Maria Bamford is definitely talented, but after watching two episodes of the first season this just didn’t click with me.

Jen: I keep trying to like this show but something about it doesn’t click with me – maybe I’ll give it another chance to prep for season 2?

Loren: Hulu’s really been killing it in the Doc category. This is VERY relevant to my interests so on the Doc Doc™ it goes.

RDT: I’ll add it to my Documentary Document™.

Jen: Why does this have to be on Hulu? OK, somebody chat me their password. I want to do this as a double feature with Exit Through the Gift Shop STAT!

Loren: I mean, that doesn’t look bad or anything, it’ll just suffer from the thing that all Amazon shows do. I’ll forget that it exists in 3…2…1…

RDT: I have too many other Prime shows to watch. Also, Apple, WTF??? Where’s my Amazon Prime Video app for the AppleTV????

Rick: I was into it until it revealed the whole military coverup thing. I was hoping for a small, well-focused British mystery. This is not that show.

Jen: I hate to just agree, but Loren said everything I would say.

Loren: This actually looks funnier than the premise and I really like almost everyone involved. The Lady™ is paying for CBS All Access so why not, you know?

RDT: Since I’m paying for CBS All Access, I’ll give it a watch, sure.

Rick: I stopped watching halfway through. Even if I were willing to pay for CBS All Access, I wouldn’t watch this.

Jen: So it’s not just Star Trek on there? Meh. I’m not ponying up just for this even though I am crushing hardcore on Jason Mantzoukas.