War for the Planet of the Apes

Loren: The first of these movies made me very uncomfortable with all the Malfoy abusing ape parts. I have yet to bother with the sequel so the same will probably hold true for this one.

RDT: Well damn, I guess I’m the outlier this week. I really liked the first two. So count me in for the 3rd, and final (nobody believes that, right?), film in this trilogy.

Rick: I can’t bring myself to care about this prequel story arc. I feel like it’s more interesting not knowing how it all happened. Also, spoiler alert from 1963: The apes win.

Jen: Dammit Dicky-Dick! Well I’m out now. Kidding… although I have seen all the original Apes films, I’ve not seen any of this new series and I’m sort of OK with it.

RDT: Horror. Not my thing.

Rick: So, it’s “The Monkey’s Paw” shoved into a Hellraiser-esque mechanical box. It’s not the worst idea, though it has the same look of nearly every lower budget studio horror movie that’s come out in the last decade. Maybe once it hits home video.

Jen: Meh, it sure is a horror movie.

Loren: War movies are not my thing. I like my violence less realistic and hopefully involving Nicholas Cage.

RDT: Not gonna lie, for the first 30 seconds of that trailer, I thought it was a documentary. When I saw the lap dance I was like “Damn, they really got personal.” Then I saw the JAG guy and was like “Oh. I’m an idiot.” As to the quality of the film, doesn’t look ½ bad. Maybe…?

Loren: It wouldn’t seem like that’s something I’d be into but the Hitchcockian vibe of it had me pretty enthralled. I really hope this stays on my radar.

RDT: You know, at first, I was out. Not for me. But as the trailer continued, it started to pull me in. I doubt I’ll see it in theaters, but I’ll give it a go streaming.

Jen: Ooooohhhh, me likey. This looks interesting. Sort of a modern twist on a period piece we’ve seen before. I’m intrigued.

RDT: Looks interesting enough, but I will likely never see this movie.

Rick: I’m not a huge avant garde fan, but Alejandro Jodorowsky’s vision always draws me in. It’s a goddamn shame he was never able to bring his version of Frank Herbert’s Dune to fruition (I can’t recommend the doc Jodorowsky’s Dune highly enough). I’m a total mark for this. Hopefully I can catch it in theaters.

Jen: If I didn’t have a kid this it totally the type of movie I could see myself dragging my husband to. But… kid exists so I think we’ll watch Moana on DVD again. (Jen! Moana is now streaming on Netflix! At least that’s save you a walk to the dvd player! –RDT)

RDT: I probably should watch this. But I likely never will.

Rick: I cannot fathom having to live in a war-torn country, and I definitely don’t have the temerity to do what these journalists are doing. I don’t know that I’ll ever watch this, but it’s good to know that these people are out there. I hope they can actually make a difference for their country.

Jen: This looks like a hard watch. Important, but not easy to sit through.

Loren: This is not the type of movie I will ever see. Also I HATED that trailer.

RDT: Feels like an episode of Master of None, sans Azis. I’m good.

Rick: I’m with Loren and Jen. That trailer killed any interest I had in that story.

Jen: This trailer irritated me. It was too cutesy by half. I’m out.

Loren: Why does half of this movie look like a send up of 70s exploitation movies? When covering a serious topic maybe that’s not the best course of action. I’m out.

RDT: So this is a documentary? The reenactments look terrible. I’ll pass.

Rick: I think I’d prefer a 60 Minutes-style piece on this story than the way this doc is handling hit. It’s a shame. It otherwise looks interesting.

Jen: This is an interesting choice and I like it a bit better than Loren and RDT, I don’t know that I’ll end up seeing it but I appreciate the “outside of the box thinking” here, even if it does feel a bit in poor taste.

Loren: That looks kinda fun and cute. Plus I really like Kelly MacDonald’s accent. I’ll check this out at some point.

RDT: When I thought it was going to be a period movie about two groups of kids fighting over this island, I was in. But then it got pretty melodramatic and my interest waned.

Rick: That took a turn I wasn’t expecting. Not unwelcome, but unusual. I’ll keep it on my radar.

Jen: This does look pretty fun and enjoyable family-friendly fare – just the sort of family adventure movie I’ve been asking for. In.

Loren: I have a feeling that the trailer makes this movie look better than it is. The trailer doesn’t make that movie look great.

RDT: I fell asleep watching this trailer. I have nothing else to add.

Rick: These type of crime movies are right in my wheelhouse, but it doesn’t look like it brings anything new or interesting to the genre. Meh.

Jen: Meh, it sure is a “crime gone wrong/noir” movie.

RDT: Trailer kept stalling out. But I wasn’t impressed with what I saw.

Rick: Please re-read my feelings on The Persian Connection.

Jen: Meh, that sure is a “crime gone wrong/western.”

Granny of the Dead (Limited)

Loren: Oh cool! A shitty student film version of Shaun of the Dead but with old people.

RDT: With that title, do I even need to watch this trailer? No, thank you.

Rick: I made it about twenty seconds into the trailer before I gave up. If you must watch a granny-related horror movie, I’d recommend you go back and watch 1988’s Rabid Grannies instead.

Jen: Stop, Granny of the Dead, or my Mom will Shoot – yeah I couldn’t make that joke work, but I tried harder than this movie.

RDT: Is this gonna do that thing where you’re not sure if he’s crazy or not? And then the ending will be all ambiguous? Yeah, I hate that. 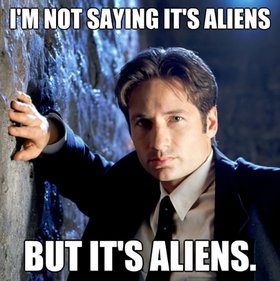 Loren: I’m still in for this show, but it’s testing me.

RDT: (reads what Rick wrote…) Holy shit, I thought I was the only one. I have tried with this show, multiple times, and I just can’t get into it. When I tell people, I usually get a “Wait… YOU don’t watch Game of Thrones?!?!?!” No, no I don’t. And now that I know I’m not alone (tip of the hat to Rick), I may never.

Rick: I tried, people. I really did. I watched the first season and part of the second and not even the promise of dragons could keep me interested. You kids have fun, though.

Loren: That got a few chuckles from me. I dig the cast. I might check this out.

RDT: Given the pedigree of the talent involved, I feel like I should want to watch this more. But…I don’t.

Rick: I like the cast, but I feel like this show would get on my nerves after a few episodes. Consider it a “maybe”.

Jen: I… want to watch this. And it’s on Netflix and I just finished “Orange is the New Black,” so, I probably will.

Jen: Since the mehs are taken, I’ll say ugh.

Loren: I agree with Rick below that this is a very serious subject especially because the Great Barrier Reef was declared dead last week. But also:

Rick: This is a serious subject, but this is all that kept popping into my head: 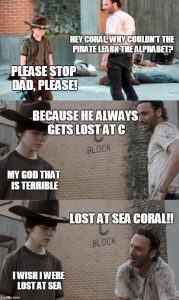 Loren: Neat. Sure why not. Right when I’m done with the first season.

RDT: I feel like I should watch a few regular episodes of this first.

Rick: The tech nerd in me wants to check this out just to see how well it works.

Jen: Interesting. I don’t have much to add. It looks interesting.