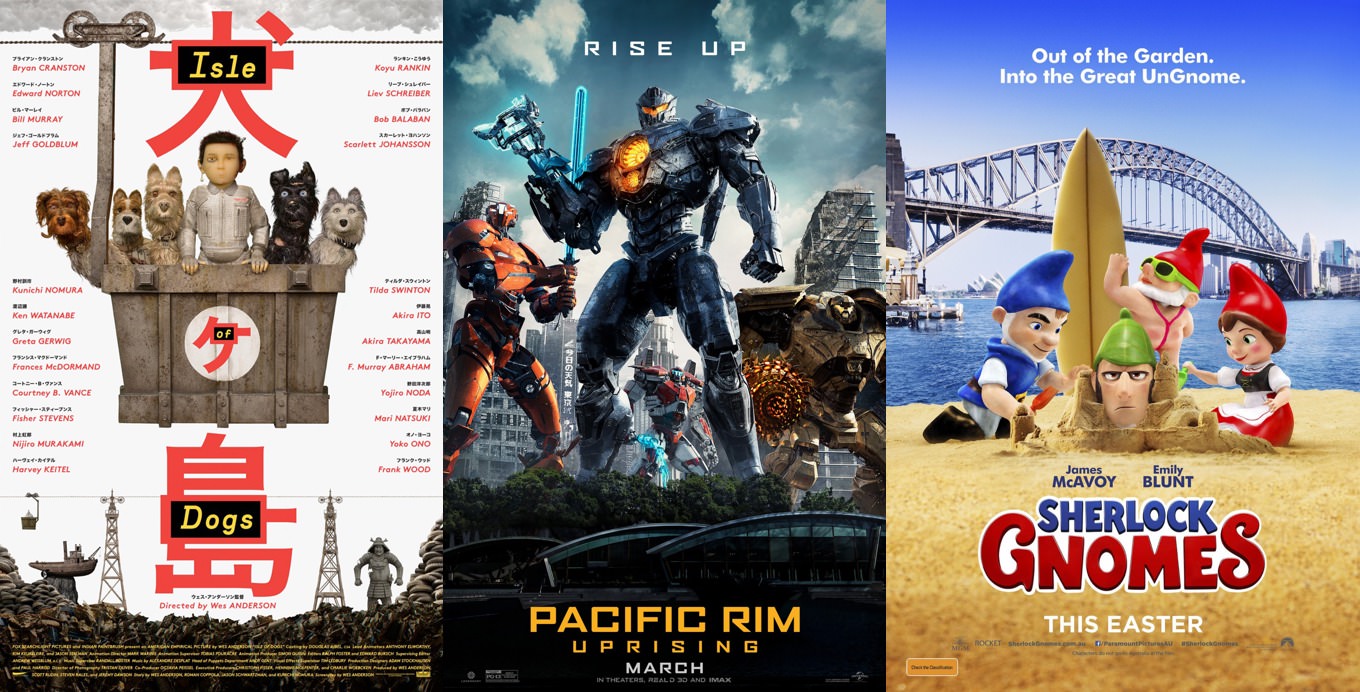 Loren: I liked the first one but haven’t the will to see this one. Maybe streaming but who knows.

RDT: I guess the apocalypse wasn’t canceled after all. (Also, I have no desire to see this movie.)

Jen: Did we need a sequel to this? I do love John Boyega and would love to see him and Idris Elba together for real sometime, but I’m skipping this one.

Loren: I like more Wes Anderson than I don’t. I never did see the Fantastic Mr. Fox though, so I’m not sure how I’ll feel about his stop motion stuff. I guess we’ll find out because this looks adorable.

RDT: Wes Anderson is just a hair bit too weird for me. But good for those that enjoy his stuff.

Jen: I find Wes Anderson delightful (although I could see how some find him cloying) and am 100% on board for this one.

Loren: This is one of my secret fears. Being locked up against my will in a mental institution. It’s one of those things where I’m like, “this doesn’t actually happen to people” but like what if it does?

RDT: You’d have to be unsane not to watch this movie! (or whatever….)

Jen: To the wikipedia to find out if she’s sane or not!

Loren: I didn’t think that could get worse looking but every beat was more so than the last. Woof.

Jen: My husband: “we have to make sure [our child] never hears or sees that commercial or she may want to see that movie” Me: appalled nod

Loren: Not enough country music in this Jesus movie. I’m out.

Jen: I went to Catholic Mass every week for about 20 years. I think I’m all good.

Loren: Shoulda called it The Fault in our Star. Get it? Because the sun is a star? Yeah, you get it.

Jen: A comment on this YouTube link said “this is loosely the plot of Shrek”  That was the very best thing about this trailer for me.

Loren: This should probably be the last Dangerous Minds type movie for a while.

RDT: Loren, I originally read that as “Dangerous Liaisons” and was all “what trailer did he watch?!?!?!” But then I realized you said “Dangerous Minds” and, well, yeah, so, yeah, umm, what Jen said,

Jen: I like how matter-of-factly they treat her Tourette’s Syndrome. I can’t imagine I’ll get around to seeing this, but I like that it exists.

RDT: Ok, so more and more, I hear people pronouncing it “BI-opic,” but I’ve always pronouced it “BIO-pic.” And now I’m not sure which is right. But I don’t care quite enough to look it up either. Quite the conundrum.

Jen: It’s BIO-pic. I was more interested in googling the artwork that resulted from this than watching the process though.

Izzy Gets The F*ck Across Town

Loren: I don’t know. I’m kinda into it. Hopefully I’ll remember this one when it hits streaming.

RDT: Have you ever noticed how Haley Joel Osment’s face kinda stayed the same size, but his head just got bigger around it? Please don’t misunderstand me. I don’t say it to be mean, and I hope it doesn’t come across that way. It’s just there.

Anyway, this actually looks interesting. Feels a little Diablo Cody but….better…? I’ll give it a shot, sure.

Jen: I wouldn’t kick this movie out of bed. Does that even make sense? It’s early and I’m trying to think of something to say people, work with me.

Loren: I thought for most of that it was actually in her head but then she wouldn’t really have that giant electrified axe and that’d be a shame.

RDT: So, A Monster Calls a Girl This Time….?

Jen: So sort of the opposite of the BFG then? I feel like this wants to be a sort of Goonies for girls, and I’m OK with that.

Loren: I sure hope those wealthy millennial wine makers do alight.

RDT: I remember, right up until I tried it, I thought wine would taste like grape juice, but with alcohol. It does not and I don’t like it. It’s weird though. If I say “I don’t like wine.” the response I get is “Well, you just have to develop a taste for it.” or “We just need to find you ‘the right wine.’” But if I say, “I’m not really a ‘wine guy.’” People don’t push. I don’t see the distinction, but “wine people” do…? **shrugs** Anyway, I’m never going to watch this movie. Sideways is great though!

Jen: This feels French and pretentious to me. I hope that doesn’t sound too judge-y but then, I guess judge-y-iness is the whole point of this exercise, so there you have it.

A Bag of Marbles

Loren: This doesn’t look bad per se, but it does feel like we’ve seen it before.

Jen: That looks like a lovely film. I can’t imagine I’ll remember it exists by the end of this blog though.

Jen: Me likey. I listened to all of the Heaven’s Gate podcast (I recommend it) and this felt like a jumping off point from that story. I’ll check this out.

Loren: I don’t think I need this movie in my life. That’s not to say it looks bad or anything, just not for me.

RDT: I feel like everyone is “acting.” Maybe it’s because the dialogue doesn’t sound natural? Eh, I’m probably gonna skip it.

Jen: The “embracing life” storyline is not enough to get me to sit through watching a girl die.

Beauty and the Dogs

Loren: Damn, it’s horrible to think that women still, in this day and age, are treated this way. So much so, that they have to make movies portraying these atrocities to get them any notice.

RDT: I can’t put it any better than how Loren did.

Jen: They didn’t need the “based on a true story” tag for me to believe this was real.

RDT: Not a music guy.

Jen: Is this trance or electronica or house or… I’m not into the dance music scene so maybe I need this movie to teach me something? Or not.

Loren: I think this one, is the one I wiki to find out what happens.

Jen: Tell me how it turns out, Loren.

Loren: Disney channel by way of Netflix. Not the target demo for this one and that’s ok.

Jen: This looks like Netflix’s attempt to corner the Freeform market. If I were 13 I’d totally watch this.

Loren: I like the Workaholics guys but I don’t think I’ll ever be high enough to enjoy this movie.

RDT: I’ll give it a shot, despite my overall lack of high-ness.

Jen: This is classic dumb bro stuff, but the addition of Shaggy piqued my interest. Not sure if I could sit through all of it, but maybe I’d give this a shot? I mean, it IS raining in LA, what else is there to do?

Loren: Didn’t watch Season 1, yadda yadda yadda. But I don’t think I’m going to either. Too bad, I love me some Timothy Olyphant but I think I’ll just rewatch Justified instead.

Jen: I never watched the first season, but I do love this cast and, maybe it’s the Hootie and the Blowfish talking, but I think this is really cute.

Loren: I love Bill Hader a lot and will definitely give this show a shot, but I have to ask, what is this show in Season 2 or beyond?

RDT: And we’re on a “what Loren said” streak with tv/streaming. What does three in a row get me?

Jen: I think Bill Hader is great but another assassin story? It seems like everyone’s a hitman in the world of Hollywood and that just gets repetitive. I’d watch half of this story.