Loren: I feel like I’m the only person who never watched this show. So why would I watch the movie?

RDT: My disinterest in the show carries over to the movie.

Rick: I have never watched an episode of this series, but I know there are legions of fans who are clamoring for more. I hope they enjoy.

Jen: Seems unlikely that *none* of us would have seen this, but there it is. Good on ya for the fans.

AJ: I just never got into this show. I may someday still – who knows. But I am sure the fans are going apeshit for this, right? Good on them. I hope it holds up to their expectations. It looks pretty good, I think.

Loren: I wasn’t sure going into this that I was going to be down for it. That trailer did enough to keep me pretty invested. Count me in.

RDT: I’m totally into this. It looks like good, smart sci-fi, which we don’t get enough of. I might try to catch it this weekend.

Rick: Is this an unofficial sequel to Space Cowboys? Half-jokes aside, I’m in for this. I’m always up for what looks like smart sci-fi, even if the whole “mission went sideways/we need to send someone” trope is a bit tired.

Jen: That looks pretty solid. I’ve heard great things, including a lot of comparisons to Apocalypse Now and Blade Runner, two movies that sucked me in to their respective worlds. This feels like one to see in the theater.

AJ: Brad Pitt is having a good Summer, eh? I’m only interested in seeing this because it’s him and I’m a big fan. And I swear it’s not just because he’s pretty. Which he is. Also just curious, is he shirtless at all in this movie?

Loren: I’m all set on “Angry White Man The Movie”. I have no particular love for the franchise so…

RDT: Stallone aside, this franchise followed a similar path as Rocky. Start out smart and thinky with the first one. Get caught up in the (no pun intended) over the top tone of the 80’s. Falter a bit but get back to thinky for the last couple of flicks in the franchise. Though this may not be as thinky as Balboa/Creed. All that being said, meh.

Rick: I’m a devout fan of this series, both the good (First Blood, Rambo) and the ridiculous (Part II and Rambo 3), but I’m not excited for this movie in the least. Rambo’s arc came to a fitting conclusion at the end of the last movie. After a lifetime of violence and heartbreak, he finally got to go home. Bringing him back to face off against a drug cartel, one of the laziest of tropey villians one can put in a script, screams of a lack of ideas or motivation. This is just going to be Straw Dogs/Taken cranked up to a million. It’s unnecessary and cash-grabby. I may watch it in a third run theater to see if I’m right, but it’s definitely going to be a curiosity hate-watch.

AJ: I have never seen a Rambo movie. And so I’m not likely to see this. And Rick’s certainly not selling me on it!

Loren: I feel like I’m supposed to like all those people (some of which I do) but man this looks boring and tedious. Pass.

Rick: Um, no. But I’ll track down the novel.

Jen: This was made 4 years ago? That doesn’t bode well. If reviews are solid I might give it a watch on streaming, but otherwise I’m good for now.

AJ: I have zero interest in Zeroville.

RDT: I have no desire to learn anything else about this guy.

Rick: The world has enough evil floating around. I don’t need more of that, past or present, shoved in front of me.

Jen: I know Roy Cohn was a bad dude, I’m not sure there’s anything revelatory here. Maybe I’ll watch the HBO Angels in America miniseries instead.

AJ: Roy Cohn was a lawyer for Senator McCarthy during the Army–McCarthy hearings in 1954, and he also assisted with McCarthy’s investigations of suspected communists. He was also a lawyer for Trump, Ruper Murdoch and several infamous mobsters. What a guy. I guess the doc might be interesting but I don’t think I can stomach it right now.

Loren: I’ve always liked Burn Notice, he’s a pretty solid actor. This could be a fun ride or extremely terrible but I’ll give it a go at some point, for Burn Notice’s sake.

RDT: If Rick screens it, I’ll watch it. Otherwise, I will likely forget it ever existed.

Rick: So, it’s a loose remake of The People Under the Stairs/Don’t Breathe? I mean, I’m kind of into it because of the cast, but it’s almost too familiar to get fully behind.

AJ: OMG, who knew Kyra Sedgwick had that in her back pocket? I may have to summon some courage to see this — it looks like a great dark comedy, despite however scary it might be.

RDT: Looks cute. I’ll keep it on the radar.

Rick: I think the most wedding invites I got in a year was four, so I kind of get where the characters are coming from. Also, this looks fairly funny. Not in theaters funny, but on the couch with a beer funny.

Jen: Sarah Hyland is adorable and rom-coms with weddings in them are always a lot of fun. I would stream this for sure.

AJ: So this looks cute. Like something I’ll watch on demand some lazy Sunday afternoon.

Loren: I just wish (besides poker) I knew what this movie was about.

Rick: I have no feelings one way or the other about this movie, which is rare.

Running With The Devil

Loren: Where’s the fun, the energy in that? That couldn’t have looked like a more dour Nick Cage movie if it tried.

RDT: I watched approximately 1:16 of that trailer. And that’s about all of that movie I think I’ll ever see. Also, hasn’t Nicholas Cage paid off his taxes yet? I would like him to get back to, you know, acting.

Rick: Man, a lot of people have boat and/or dinosaur head payments these days.

Jen: Ah Nicholas Cage, thank you for your continued service to the $1 DVD bin.

AJ: Do you think Nic Cage puts those 70s era grandpa glasses in his contract these days? But anyway, I’ll always get to a campy Cage film at some point.

Loren: I think I’d rather just experience the poem than see how the proverbial sausage is made.

Rick: Slam poetry is not necessarily my jam, but I appreciate how much passion goes into it. I might actually benefit from watching this.

Jen: I do love my docs and this is something I don’t know much about, I’ll check this one out for sure.

AJ: Cool to see a doc about this – I doubt a lot of people know much about this world.

Loren: Cannibalism! Hahahahah! Get it?!?!

RDT: Such a great good cast for such a not-funny-looking-at-all movie.

Rick: So someone took part of the premise of an old episode of American Dad and made an unfunny movie out of it. Super.

AJ: I am guessing from the trailer that Demi Moore does not pull off comedy well. I don’t think I’ll be making plans to see this anytime soon.

Rick: So it’s Dexter mixed with a lot of the elements from Ryu Murakami’s novel, Piercing. It looks on the cheaper side, and it didn’t exactly make waves at Fantastic Fest last year. I’ll pass.

AJ: It’s actually a strong plotline that I’m surprised we haven’t seen yet — a social worker out to protect his cases to the extreme. Looks like Seann William Scott’s performance is strong, too. That said, I couldn’t even get through the whole trailer because ever the pansy am I.

Loren: Let’s make a movie we’ve already made a few times before but somehow worse.

Rick: I guess someone watched Her and Blade Runner: 2049. Jebus, there’s a serious lack of originality this week. I like Richard Kind, but no.

Jen: Man suffers mid-life crisis, seeks comfort of young, beautiful woman (or computer program) – tale as old as time. I do hope the wife gets some with that cute bearded guy in the office. That’s the story I’m more interested in seeing.

AJ: Is this a more heart-wrenching Her? I could be down.

Loren: Why did a producer of A Nightmare on Elm Street make a bad student film in 2019?

Rick: The retreads just keep on coming. This one is a ripoff of The Perfection, Whiplash, and Grand Piano. Anyone with something original out there? Hello…Anybody…?

Jen: This looks a lot like The Perfection and they say perfect in the trailer enough for me to think it’s no accident. No thanks.

AJ: Is this a scarier version of Whiplash? I am not down.

The Last Kids on Earth

Loren: That’s a pretty adult concept for a kids cartoon. Color me intrigued.

RDT: I have other cartoons to watch. #IAm42

Rick: Feels like the same tone as Phineas and Furb and Milo Murphy’s Law. It looks kind of fun, and I appreciated the ping pong ball gag. It will make good background entertainment while I’m futzing around the house.

AJ: Cute but I am probably not the intended audience.

Between Two Ferns The Movie

Loren: I’m not entirely sold on the road trip aspect but super down for new Ferns content.

RDT: I’ve been rewatching the interviews. Super funny. Super IN! for this.

Rick: Yessssssss! We’re also getting more actual episodes before the end of the year, so double Yessssssss!

Jen: “Is that what he calls his penis?” That one line sold me on this whole film.

Loren: The premise is fantastic and I love me some David Tennant, I’ll keep it in the queue.

RDT: Color me intrigued. I’ll put it in the queue but will likely need to be in a very specific mood to watch it.

Jen: I like this premise a lot and it feels like a good way to get me in the door on some foreign language material. I’ll give it a shot.

AJ: As I tweeted a couple weeks back: 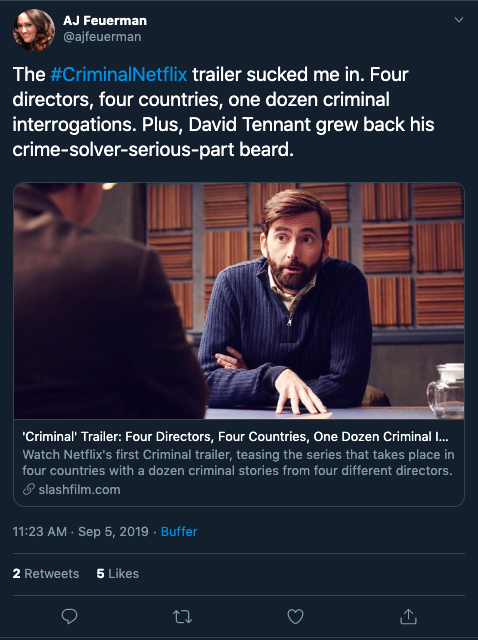 Loren: I kind of find him fascinating. He’s probably the only billionaire I can think of that isn’t some sort of supervillain and is actively trying to better this planet.

RDT: I don’t know that I have the attention span for a 3-part docu……oh! Puppy videos on YouTube!

Rick: I should start putting on docs while I’m working on mundane things at work. I feel like this would pass the time well.

AJ: How has no one made a doc about Bill Gates, yet? He’s been on a lot of podcasts I listen to promoting this and I am sunk in. Can’t wait to watch it.