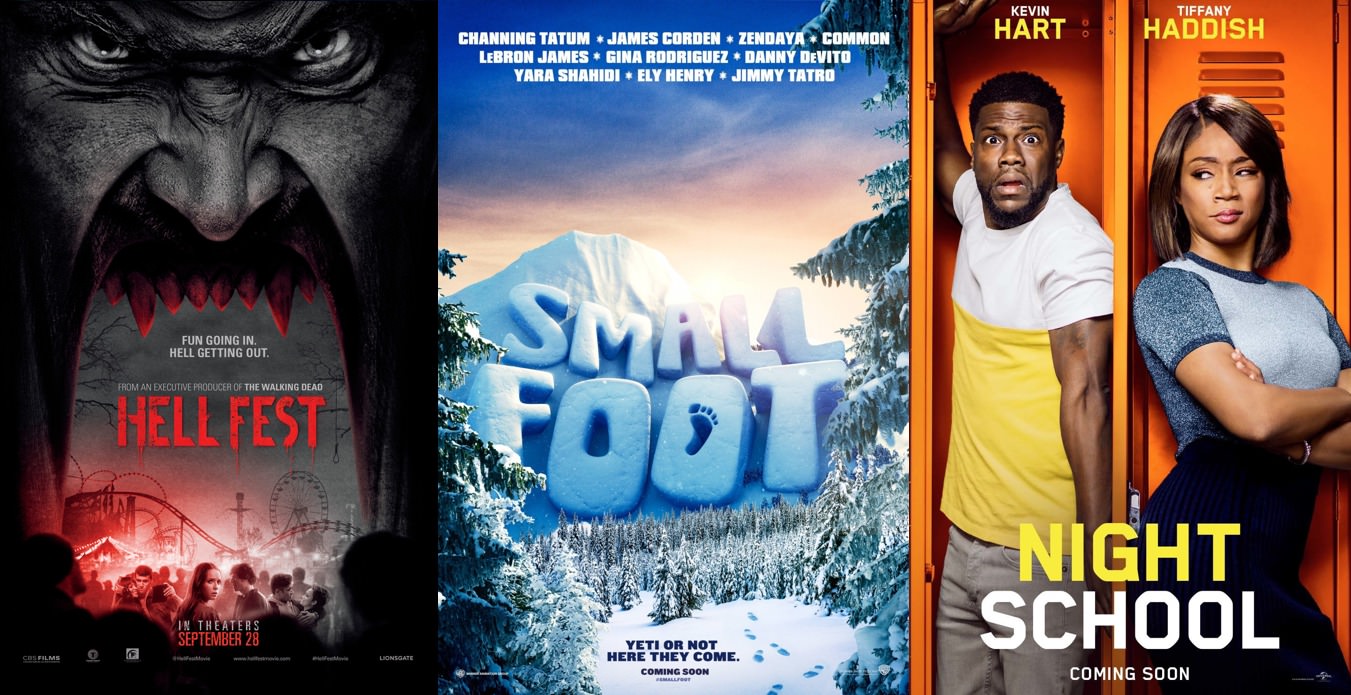 RDT: To date, I have only liked Kevin Hart in Jumanji. I don’t expect that to change until the next Jumanji. Maybe…

The Old Man & The Gun

Loren: That looks really good. I wish they hadn’t have Afflecked it all up.

RDT: This is getting really good reviews. And is supposedly Redford’s last acting appearance. I’ll keep it on my radar.

Loren: This looks like the lamest version of Beetlejuice ever. Also, what the hell is Trico Tri?

RDT: Isn’t it a kind of meat? Like, “I’ll get the Trico Tri, potato salad and a piece of cornbread.” The meat may be good, but the movie looks pretty bad.

Loren: There seems like a lot going here, but I like it conceptually. I wish it was shot a little better but the art/animated sections are a nice device. I don’t know that I’ll ever get around to this when it’s all said and done.

RDT: I agree with Loren. Well intentioned, but could’ve used a little more pedigree behind the camera.

Loren: I kinda want to pair that with Desperado and maybe something like Sabotage. But I dig it. I doubt it’s good, but sometimes that doesn’t matter.

RDT: I dunno, I was kinda into that. Great cast. I’ll keep it on my radar.

Loren: It’s too bad that charity isn’t going to get any money, because even if that movie only cost like a million dollars to make it’s not going to net a profit.

RDT: Ok, that trailer is all over the place. And I wish they hadn’t revealed the twist. AND it looks terrible. But, I dunno, I was kinda into it. Plus it goes to help a good cause!

RDT: Is the “coming of age” movie the new “superhero” movie? I feel like we’re getting one almost every weekend. But like superhero movies, as long as they’re good, I don’t care. And when they’re not, I don’t care. Can’t quite tell with this one.

Sui Dhaaga: Made In India

RDT: What he said.

Loren: Powerful stuff. This looks well made and is obviously telling a story that continues to need to be told. I fear for the inevitable backlash it’s going to receive.

RDT: Tough subject. But one worth exploring. I’ll keep this on my radar, too.

Loren: Ballsy (or not I guess) take to update the time period. Sadly that didn’t look good enough to get me to see this story told again.

RDT: Again, what he said.

Loren: Sure I guess. I’ve seen worse versions of this.

RDT: If it’s worth watching, Rick will screen it.

Loren: You can’t take away that is one of the most impressive feats out there. You also can’t get me to see this movie.

RDT: There’s a Han Solo joke in there somewhere. But it’s late, and Loren is waiting for me to finish.

Loren: Part of me wants to think that looks good, but I know better than that. That hair and accent alone proves to me that it won’t be.

Loren: Huh. Who knew? I guess there was this one man army badass that fought back against the English during the Irish Famine. Why didn’t we learn about this shit in school?

Loren: Though it looks like a fairly standard music doc, I do love Joan Jett and the Runaways. On to the Doc Doc™ it goes.

Loren: This is definitely something we’ve seen multiple times before. This doesn’t look any better or worse than any of those.

RDT: Yeah, I’ll just watch Chronicle again, and I don’t even like Chronicle.

Loren: Let’s see, I like Mary Elizabeth Winstead, I like stand up, I like seeing people’s dreams crushed by the succubus known as LA. I don’t see why I wouldn’t be all about this movie.

Loren: I haven’t seen a doc use straight up recreations as a device in forever. I would rather it be one way or the other though. Either it’s a news piece or it’s a narrative. I don’t want them smushed together.

RDT: And once again, Loren hits the nail on the head.

Above and Beyond Acoustic: Giving Up The Day Job

Loren: This would be a lot more impactful if I had known Above and Beyond’s music before seeing this trailer. I do love the idea of an electronic group kind of aging out of the scene but still wanting to be musicians. On the other side I don’t know that this would keep my interest for a feature length movie. Maybe, a short would be better served.

RDT: You know what I’m going to say to this.

Loren: I don’t think I understand, but I want to. Into the queue with you.

RDT: I wrote a report about wolves in the 6th grade. A girl named Gabrielle helped me. I got an A thanks to her. In an alternate timeline, we’ve been married 20 years and have 3 amazing kids. Or she’s the Winnie Cooper to my Kevin Arnold. Regardless, in this timeline, I never saw her again after 6th grade “graduation” (because that’s a thing). Anyway, this looks fine.

Loren: I really find Jack Whitehall funny on the panel shows I’ve seen him on. I also meant to watch the first season and then didn’t. I hope to catch up on both of these seasons soon.

RDT: I heard decent things about season 1. So, maybe if I catch up with that, I’ll give this a shot.

Loren: I always forget how beautifully this show is shot. I don’t know that I care about these stories but damn do they look nice.

RDT: This is a show I absolutely need to catch up on. It’s in the queue already.

Lessons From A School Shooting: Notes From Dunblane

Loren: I grew up about a half an hour from Newtown. I remember the day of the Sandy Hook shooting vividly, which is odd for me, I barely remember last week. I remember seeing the breaking news on a TV in the lobby of the building I was working in and being stupefied. This wasn’t something that was supposed to happen in our sleepy little community. I immediately started calling my friends from back home that were still in the area, many of which have kids the same age or are teachers. Thankfully everyone I knew personally was ok. I don’t know if I have the constitution to have all those feelings dredged up again.

RDT: I think I’ll leave this one to Loren as well. Strong words for a rough subject.

Loren: I’m always a sucker for Shakespeare set in modern times. Plus, Jesus, look at that cast. If I remember that Amazon exists I’ll check this out.