Wow, there’s a LOT to unpack in this newest trailer. First off if you haven’t already, go check out my breakdown for the First Far From Home Trailer from back in January. Once you’ve done that c’mon back over here and dive right in.

A huge amount of questions we had about the MCU post Avengers: Endgame are answered in this trailer. It is chock full of spoilers for that movie so if you haven’t seen that yet be forewarned. I mean, even Tom Holland himself starts this trailer off telling you that there are spoilers inbound. So with all that said…

END_OF_DOCUMENT_TOKEN_TO_BE_REPLACED

It has arrived! The first trailer for Spider-Man: Far From Home has made it’s way to the rest of the world after debuting at Brazil Comic Con. The first look we’ve gotten for the sequel to Homecoming is pretty great. All your favorites are back; Peter Parker (Tom Holland), Ned Leeds (Jacob Batalon), MJ (we’re still going with that huh?) (Zendaya), Flash Thompson (Tony Revolori), Happy Hogan (Jon Favreau), Sexy Aunt May (Marisa Tomei), and in place of a suspiciously absent Iron Man we get Nick Fury (Samuel L. Jackson).

There’s still no word on if this movie takes place before or after The Snappening as there’s no mention of it in the trailer. But what we do get info on is our movie’s antagonist… maybe. Jake Gyllenhaal shows up as Mysterio to fight off what I originally thought was Hydro-Man and maybe Sandman but the prevailing internet theory is that he is “pulling a Syndrome” from The Incredibles and creating these monstrous threats to portray himself as a hero. To what end? We don’t know yet, probably money and fame. Quentin Beck/Mysterio is a failed actor and special effects artist who, in the comics, takes to a life of crime when things don’t work out in his chosen profession. He uses his skill set, creating illusions, to aid him in his heists. I really like that the MCU adjacent Spider-Man movies dive a little deeper into Spidey’s rogues gallery. We’ve gotten some of his biggest foes in other movies so it’s great to see characters like The Vulture (Michael Keaton) and Mysterio get their due.

Ok, enough of all that. Let’s Talk About The First Spider-Man: Far From Home Trailer! END_OF_DOCUMENT_TOKEN_TO_BE_REPLACED

It finally happened you guys! It’s been a long time coming, but we have been gifted with the first trailer for Marvel’s Avengers: Infinity War and I gotta say, it’s so rad seeing all these MCU characters together in one place. I don’t want to waste too much time with explanations of these characters and their motivations before breaking this bad boy down, especially seeing as this will be the nineteenth (holy shit!) movie in the MCU and we’ve gotten to know the characters from this now truly expansive universe pretty well over these last ten years. Interestingly, this trailer does appear to be different than the one they produced for Comic Con earlier this year, but there’s still plenty to unpack here so let’s talk about the first Avengers: Infinity War trailer! END_OF_DOCUMENT_TOKEN_TO_BE_REPLACED 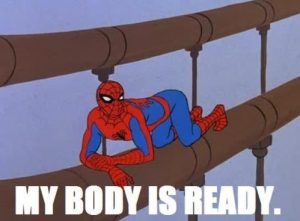 Loren: “A meditative poem about the enormity of time.” K.

RDT: Ok, that looks terrible, pretentious as fuck. But I’m still kinda curious. The whole ghost thing is weird. So, I’ll likely check it out streaming.

Do You Take This Man (Limited)

Loren: I don’t know you guys, that looks pretty gay. And also a pretty wonderful character piece. I don’t know that I’ll see it but I bet it’s pretty good.

RDT: I dunno, other than the gay aspect of it, it looks like a fairly standard story. I like the cast though. So, I may check it out eventually.

Rick: What RDT said, though I’m not sure I’ll ever get around to it.

Jen: This feels like one of those “West Side” stories of affluent LA-ites that live a life so different from me as to be unrecognizable as co-habitants of the same city. But, Mackenzie Astin. So, toss up?

END_OF_DOCUMENT_TOKEN_TO_BE_REPLACED

First let me just say thank you to whatever deity deals with movie trailer releases. After getting the abysmal Justice League trailer over the weekend we are blessed with this pretty great Spider-Man: Homecoming one.

I’ve already covered a ton of the Spider-Man/Sony history in my Breakdown of the first trailer so I won’t rehash that here. I will note, however, that this trailer doesn’t focus as much on Peter/Spider-Man being in high school. That was the first trailer’s job to give us that John Hughes Movie feel that they are going for. This one is more about the story and the action. We get a lot of both here so let’s not waste any more time. Let’s Talk About The Second Spider-Man: Homecoming Trailer: END_OF_DOCUMENT_TOKEN_TO_BE_REPLACED

We swear one day Ryan is coming back but until then we’ll have some great guests. Like this week, The Lady makes her return to the Hollywood Picture News to discuss Stranger Things Season 1 and what’s in store for Season 2.

She and Loren also talked some news bits like:

All that plus a couple of tangents.

And don’t forget to rate/review on iTunes. We’d really appreciate it!

First and foremost let me get this out of the way. AAAAAHHHHHHHHHHHHH!!!!!1!One!!!!ExclamationPoint!!   *Ahem* Sorry, I needed that.

Now, let me just say that this is what a superhero movie trailer should look like (I’m looking in your direction The Legal Proceeding of Batman v. Superman). It has everything you’ve come to expect from a Marvel movie; action, humor, Tony Stark, everything. Captain America: Civil War is shaping up to be one of, if not THE, best Marvel movies to date. Plus, SPIDER-MAN!

Here’s a brief run through of all the amazing (see what I did there?) things from this trailer.

Captain America: Civil War opens in the US on May 6th and personally I can’t wait.